Scott Bradlee’s Postmodern Jukebox: Created by Bradlee, the rotating collective of Postmodern Jukebox has spent the past few years amassing more than 450 million YouTube views and 1.9 million subscribers, performed on “Good Morning America,” topped iTunes and Billboard charts and played hundreds of shows to packed-house crowds around the world. As NPR put it, they’ve done this by “taking current Top 40 hits and re-imagining them as coming from older eras of popular music.” Since beginning their touring career in 2014, Postmodern Jukebox has consistently played in bigger venues each time they’ve returned to a market. Last year, they played two sold-out shows at the 2,100-capacity PlayStation Theater in New York City. This year, they return to the Big Apple on October 7th to play Radio City Music Hall, a historic venue with a seat capacity over 6,000. Tickets start at $36.50.

St. Louis Blues: The Blues return home this weekend for a match against the Columbus Blue Jackets on Saturday. It’s Ladies Night – with the purchase of your Ladies Night Out theme ticket(LNO16), you will receive an exclusive Blues bangle bracelet! Join us in Pepsi Plaza pre-game to pick up your bracelet and enjoy Ladies Night Out food and drink specials. It’s also SLU Billikens Night – with the purchase of your SLU theme ticket, you will receive an exclusive Blues – SLU hat! On Sunday, the Blues take on the Colorado Avalanche.

Howlin Fridays Concert Series: The Friday live music series kicks off with St. Louis born Blues musician, Marquis Knox. Marquise’s talents have earned him performing rights with some of America’s most notable blues performers such as blues legends B.B. King, Pinetop Perkins and David “Honeyboy” Edwards (the latter two also NEA Heritage Fellows). He has also performed at dozens of festivals, and has toured all throughout Europe. Tickets are $10.

Veterans Day Parade and 5K: Salute the veterans who bravely serve our country! Run or walk in honor of the veterans in your life as well as St. Patrick Center’s veteran clients. The timed 5K and untimed one-mile run/walk will be held downtown, in conjunction with the annual St. Louis Regional Veterans Day Observance Ceremony and Parade. There will be a kid’s dash following completion of the 5K and 1M events. Participants will receive a moisture-wicking long-sleeve race shirt, and plenty of refreshments (complimentary adult beverage for each registrant of age) and activities for all ages. The 5K race awards ceremony will be on the same stage as the Veteran’s Day ceremony by the city, which precludes the parade in the same location! This family-friendly morning is a great way to commemorate vets who are serving, and have served the USA. All Veterans Day 5K proceeds will go to St. Patrick Center, which annually assists 1,100 veterans who are homeless or at risk.

Romeo & Juliet Starring Grand Rapids Ballet: Commissioned by Grand Rapids Ballet, Mario Radacovsky’s innovative interpretation of the iconic Shakespeare tale focuses on the two lovers’ struggle with the social barrier that restricted and insulated them from childhood, and how it was broken for love. Under the artistic leadership of Patricia Barker since 2010, Grand Rapids Ballet has made an exciting transformation that has attracted world-class dancers, produced some of the most creative works in contemporary dance, and generated local, national, and international attention. Pre-show dinners are available for the 8pm performances.

Janice Joplin Tribute: As part of the Gaslight Cabaret Festival, talented singer Karen Irwin will be performing “Janis, Me and Bobby McGee – A Janis Joplin Tribute.” Joplin’s hits include: “Me and Bobby McGee”, “Piece of My Heart”, “Cry Baby”, “Down on Me”, “Ball ‘n’ Chain”, “Summertime”, and “Mercedes Benz.” Tickets are $30 & $35.

Straight No Chaser: The I’ll Have Another…World Tour comes to town in celebration of the group’s 20th Anniversary together. Straight No Chaser is the real deal, the captivating sound of ten unadulterated human voices coming together to make extraordinary music that is moving people in a fundamental sense… and with a sense of humor. On the road, Straight No Chaser has built a reputation as an unforgettable live act. Tickets start at $34.50 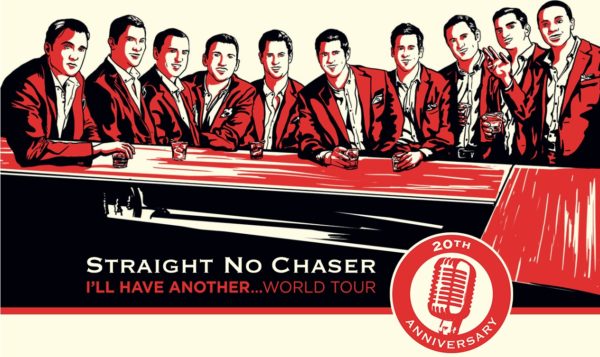 Whitaker St. Louis International Film Fest: This 25th anniversary season opens with two newly restored works from the first festival in 1992 — “Daughters of the Dust” and “Delicatessen.” The festival works to spotlight the local filmmaking scene and the glittering array of talent that the city has produced, we also look well beyond St. Louis. This year’s fest honors a particularly diverse and high-profile selection of filmmakers: Comedian Jerry Lewis, filmmaker Charles Burnett, and documentarian Gordon Quinn all receive Lifetime Achievement Awards, and actress Karen Allen is honored with a Women in Film Award. Check the website for shows, schedule, and prices.

The Monkees – Good Times: The 50th Anniversary Tour: Assembled in Los Angeles in 1965 by Bob Rafelson and Bert Schneider for the television series The Monkees, the quartet of Micky Dolenz, Michael Nesmith, Peter Tork, and the late Davy Jones brought a singular mix of pop, rock, psychedelica, Broadway, and country to their music. The Monkees’ first single, “Last Train to Clarksville,” was released in August 1966, hitting #1. When the group’s self-titled debut album arrived in stores a month later, it quickly headed for the top spot of the Billboard charts. In the wake of Jones’s death on February 29, 2012, the surviving members of the Monkees reunited and performed a series concerts. Their new show features all of the Monkees hits, plus an intimate acoustic set and solo spots for each of the singers.

8th Annual St. Louis Pet Expo: Admission and parking are free & pets are welcome! The St. Louis Pet Expo™ is a woofing, chirping, and meowing good time for the whole family! Four-legged friends can receive “spa treatments” from local groomers, sample delicious treats, and try on the latest in furry fashions; their humans will enjoy interacting with top trainers and learning pet-care tips from animal welfare organizations. There will be agility demonstration, pet talent and costume shows, and an exciting pet/owner look-alike contest! The highlight of the event is the adoptable animals showcased by area non-profit rescue groups.

Lantern Fest: Thousands of revelers join together armed with lanterns for one unforgettable spectacle. Before sundown, friends and families enjoy food, live music, a stage show, familiar princesses, face painters, s’mores, balloon artists and more. Then, when the time is just right, we will light the sky with our highest hopes and fondest dreams. Tickets are $45 in advance or $50 day of and include: a wristband granting you entrance to the event, a lantern, a marker, a lighter, and a s’mores kit.

Art & Wine Walk: Stroll downtown Belleville Main Street while sampling wines, viewing artists’ work, and listening to local musicians. Start at Abe’s Gourmet Popcorn at 101 East Main where you pick up your commemorative wine glass and map, then follow the map to Belleville Main Street businesses to sample wine, view local artwork, listen to music, and enjoy an evening of the arts! Participating Vineyards include: The Weingarten, Walker’s Bluff, and Crown Valley. Music by The Tailgate Troubadours, John Farrar, and Bongo Jak. Tickets are $20 in advance or $25 at the door.

This Weekend in St. Louis Ryan 856 days ago.

This Weekend in St. Louis Ryan 857 days ago.