According to a press released from Anheuser-Busch, the fundraiser raised almost $100,000 for the St. Louis Soccer Park, including the generous donations made by A-B and Grey Eagle Distributors. Anheuser-Busch also donated $10,000 to the Kirkwood Athletic Association to help with flood relief efforts.

Among the items available via the silent auction at the event were signed jerseys from some of the top soccer players in the world.

The company previously donated 84,000 cans to flood relief efforts in the area.

Anheuser-Busch is teaming up with Grey Eagle Distributors and the St. Louis Soccer Park Fund to host a fundraiser next week to help with the restoration of World Wide Technology Soccer Park. They will also be making a major donation to the restoration effort. 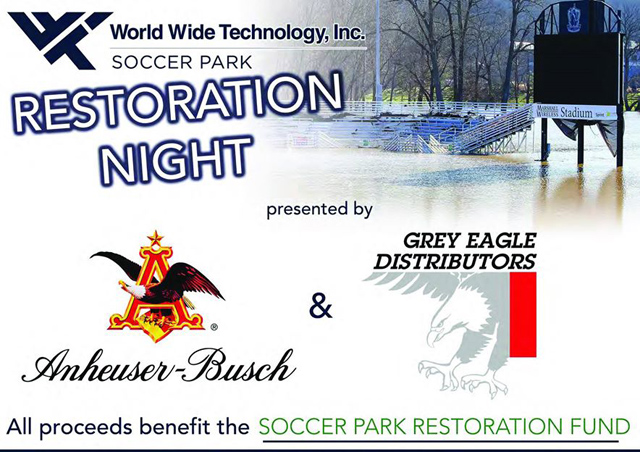 The Soccer Park has been a fixture in the St. Louis community for years. It originally opened in 1982 and was purchased by Anheuser-Busch in 1985. Along with soccer activities, Anheuser-Busch expanded the conference and office facilities at the Soccer Park. August Busch IV often conducted business from facility, including high-level meetings during InBev takeover process.

SLSG operates more than 275 boys and girls soccer teams, ranging from under-6 to under-20. It also hosts nine tournaments throughout the year, which draw teams from all over the United States and Canada Five SLSG alumni were drafted during the recent 2016 Major League Soccer Super Draft.

Flooding along the Meramec River earlier this year devastated Soccer Park.  Many of the fields were completely destroyed, while others were left with with severe damage. Bleachers were carried away by the water and four feet or water was reported to have gotten into the office areas.

With restoration costs totaling almost $1 million dollars, the St. Louis community has stepped up to help in a big way. Fundraisers have been held at various locations around the area, including Mission Taco Joint in Soulard.

The latest fundraiser will be held on Thursday March 10 at the Anheuser-Busch Biergarten in Soulard. The event will run from 6 pm to 9 pm that evening with tickets priced at $50 each. Each ticket will include “a variety of beverages and food” according to a press release from Anheuser-Busch. Music will be provided by Two Trees Acoustic Duo and there will also be a silent auction with all proceeds benefiting the World Wide Technology Soccer Park restoration fund. Representatives from the St. Louis Soccer Park Fund and the World Wide Technology Soccer Park will be on hand, as well as members of the Saint Louis FC organization.

In addition to hosting the fundraiser Bill Bradley, Anhesuer-Busch’s Vice President of Community Affairs, will be presenting a check to representatives of Soccer Park in the amount of $25,000. Grey Eagle will be donating an additional $5,000 as well.

Tickets for the event can be purchased online through Saint Louis FC. Tickets purchases are fully tax-deductible.

Saint Louis FC opens the 2016 USL season on March 26. Their first home game is scheduled for April 16 at Soccer Park.

This Weekend in St. Louis Ryan 634 days ago.

This Weekend in St. Louis Ryan 635 days ago.