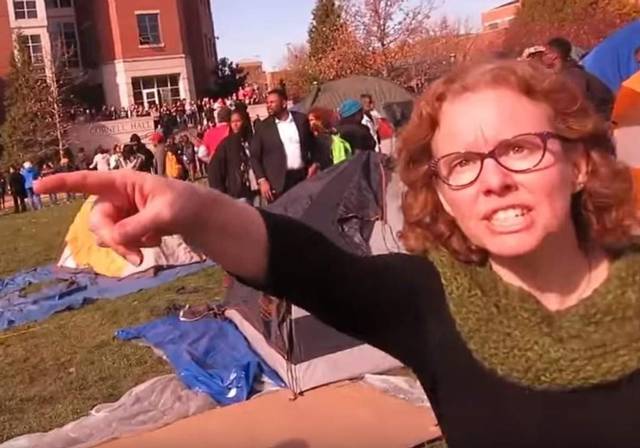 Melissa Click, a assistant professor of communications at the University of Missouri-Columbia, was charged with assault for her actions in November during a student protest at the school. The incident took place as a group calling themselves “Concerned Students 1950” protested on the South Quad area of the campus. Two student journalists  were exercising their right to photograph the events when protesters tried to keep him from doing so. Click and assistant director of Greek Life Janna Basler were among the administrators trying to keep journalists out and create a “safe space” for protesters.

Click was charged with a Class C misdemeanor for asking for “some muscle” to remove journalist Mark Schierbecker. Click’s action can be seen around the 7:10 mark of the video below. She faces up to a $300 fine and 15 days in jail.

Update: Foley said in his press conference Click will continue her employment at Mizzou and will continue to be evaluated by faculty for tenure.

Tina Fey returned to Saturday Night Live over the weekend to portray Sarah Palin in a skit along with Darrell Hammond as Donald Trump. In the skit, Fey’s Palin character endorses Trump at an Iowa campaign stop.

Ronda Rousey hosted Saturday Night Live over the weekend with musical guest Selena Gomez. In this “Teacher Trial” sketch,  Pete Davidson plays Gavin Daly, a student testifying in a court case against two of this former teachers. One of the teachers is played by Rousey.

Dirty Grandpa was the top debut film of the weekend. It’s estimated ticket sales of $11.5 barely beat out The Boy and The 5th Wave.

Check back with RealLifeSTL on Thursday for my Weekend Movie Guide. I’ll take a look at the movies opening this weekend, share what I thought of Dirty Grandpa and The 5th Wave and tell you what is coming to Keller 8 Cinemas in South County and Redbox this weekend.

Kung Fu Panda 3, The Finest Hours, Fifty Shades of Black and Jane Got A Gun all open this weekend.

John McEnroe, Andy Roddick, James Blake and Jim Courier will appear in St. Louis in April at Chaifetz Arena. The event, called the Champions Classic, will be part of the PowerShares Series tennis circuit. For more information and how to purchase tickets, check out this post I wrote about the event.

The matchup for Super Bowl 50 on February 7 is set after yesterday AFC and NFC Conference Championship games. Peyton Manning led the Denver Broncos to a 20-18 win over the New England Patriots while Cam Newton and the Carolina Panthers ran all over the Arizona Cardinals for a 49-15 win.

The University of Missouri-Columbia and Saint Louis University women’s basketball teams both continued their winning ways for the weekend.

No. 23 Mizzou broke a two-game skid with a 79-64 win over #22 Florida. St. Joseph’s Academy alum Morgan Stock led all scorers with 20 points, including 4-of-5 from three-point range. The Tigers, 16-4 on the season and 3-4 in the SEC, play next on Thursday in Columbia against LSU. That game can be seen the WatchESPN app via SEC Network +

The SLU Billikens won their sixth game in a row on Saturday night, beating La Salle 79-70. Lisa Stone’s team was led by a trio of sophomores in Jackie Kemph (17 points), Aaliyah Covington (14) and Maddison Gits (14). Kemph also added 9 assists while junior Sadie Stipanovich had 12 points and 8 rebounds on the evening. The team will 16-4 (6-1 A-10) record on the road this weekend to face A-10 foes George Mason on Thursday and George Washington on Sunday. George Mason is 3-4 in the Atlantic 10 while George Washington is a perfect 7-0. SLU returns to Chaifetz Arena on Wednesday, February 3 for an 11 am game against Richmond.

Kathleen Zellner, the wonder-lawyer that freed Ryan Ferguson and others, is already making waves on Steven Avery’s case. Zellner released a letter over the weekend from former prosecutor Ken Kratz to Avery. In the letter, seemingly a response to a letter Avery sent Kratz asking about other fingerprints found on Halbach’s car, Kratz  brushes the idea that Avery was “set up” off and tells Avery he wants him to confess so he can write a book about the case.Two years after Avery’s guilty verdict, Kratz was disgraced after text messages he sent a domestic violence victim were revealed.

Rock band Nickelback tweeted earlier today that they are working on new music. The band also acknowledged a tweet from Kanye West yesterday that revealed the track list for his upcoming album, Swish.

The massively successful band led by Chad Kroeger last album came in November of 2014 with No Fixed Address. Despite selling more than 50 million albums across the world, the band is often the punchline of jokes. Someone has even been trailing Ted Cruz on the presidential campaign trail with a sign reading “Ted Cruz Likes Nickelback“.

There is no further information on new music from the Canadian band.

Good news: we're working on new music. Bad news for us: @kanyewest 'Swish' will be the best album of all time. #SWISH #Kanye