Dirty Grandpa, The Boy and The 5th Wave Open In Movie Theaters

Dirty Grandpa, The Boy and The 5th Wave in movie theaters around St. Louis this weekend. The Martian is still available to catch at Keller 8, while Joe Dirt 2 and The Diary of a Teenage Girl are among the movies now available to rent at Redbox.

The Boy premieres at MX Movies in downtown St. Louis this weekend. Ride Along 2 and The Revenant are also playing.

Don’t pay regular price for a ticket to see one of these new releases in the theater. Sign up now for MoviePass at MoviePass.com.

Ride Along 2 took holiday weekend box office crown over the Martin Luther King Jr. holiday weekend. The sequel took in $41 million in its debut.  The Revenant took second place with $37.5 million while Star Wars: The Force Awakens rounded out the top three with $33 million.

13 Hours: The Secret Soldiers of Benghazi made $19.2 million in its debut while Daddy’s Home pulled in $11.9 million to round out the top five.

What I Saw This Week

In the last week I’ve seen Ride Along 2, The Revenant and 13 Hours: The Secret Soldiers of Benghazi.

Ride Along 2 is pretty much what you’d expect from the sequel. Kevin Hart and Ice Cube back and joined by Olivia Munn. Does anyone else thing Olivia Munn and Hope Solo look remarkably similar? I saw a review of the film where the reviewer though the chemistry between Hart and Cube was wasted. I thought the chemistry between the two was used often and well. Oh, and here are Olivia Munn and Hope Solo side-by-side. (Spoiler: this conversation has been brought up before, but I think it needs to be brought back. 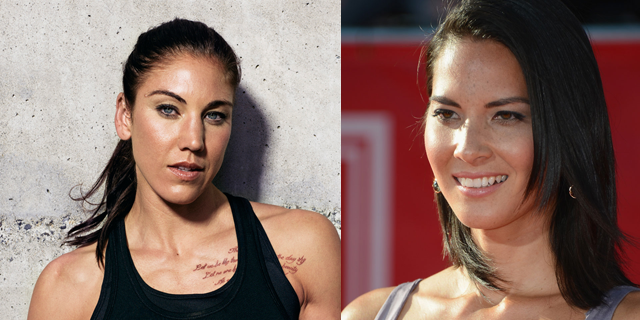 Everyone is raving about The Revenant and Leonardo DiCaprio’s performance. My two thoughts leaving the theater were 1) it was long and 2) I’m glad I didn’t try to eat anything substantial while watching it. The cinematography is also pretty cool.

13 Hours: The Secret Soldiers of Benghazi was one of the best films I’ve seen lately. I thought the action scenes and the downtime scenes of the contractors were great. I was really surprised by the dialogue and how many times great one-liners came out of the actors and actresses. As much as its a movie about a solemn event, there were quite a few lines that caused the most of the theater to laugh. As far as the people who say “oh that’s not the way it really happen”, shut up. The movie is based on the story as told by the guys actually on the ground that lost people and saved countless others.

The Lantern complains that Dirty Grandpa “suffers from too many stereotypical jokes.” Well, it’s definitely not a coming of age story of a young man and his grandpa. Robert De Niro stars as the grandpa who convinces his grandson to drive him to Daytona Beach just a day after his wife’s funeral. Oh course, the pair run into hijinks along the way. There’s even a sex scene between Aubrey Plaza and the pretend-professor De Niro. Julianne Hough plays Efron’s fiance in the film.

USA Today gave The 5th Wave 3-out-of-4 stars. Chloë Grace Moretz stars as a sister trying to save her younger brother in the face of an alien invasion. The film is based off Rick Yancey’s young adult book of the same name.

The Boy is the latest horror movie to hit theaters that I don’t plan on seeing because I am a wimp. Lauren Cohan of The Walking Dead stars as a nanny who comes to take care of an 8-year old boy. She finds out that the boy actually died two years ago, but the parents insist on someone take care of him in a very precise way.

Catch It Before It’s Gone

Keller 8 Cinema in South County doesn’t welcome any new movies this weekend, but it is still showing The Martian is you want to see it on the big screen before the Oscars.

Make It A Redbox Night

Redbox welcomes Joe Dirt 2 to its magical red machines this weekend. Don’t expect anything epic, but it does continue the saga of Joe Dirt and has a few laughs.

For some unknown reason, a Jumanji remake is being made. The original film with Robin Williams, Kirsten Dunst and Bonnie Hunt was a fantastic classic. The script for the re-write by the original writers, Chris McKenna and Erik Sommers. Jake Kasdan will direct the movie. He has previously directed Bad Teacher and Sex Tape, as well as episodes of New Girl, Freaks and Greeks and The Grinder.

Actor Will Smith has announced that he is joining his wife, Jada Pinkett Smith in boycotting this year’s Academy Awards. The pair are boycotting the awards show of the lack of diversity among nominees.

Star Wars; Episode VIII was supposed to hit movie theaters on May 26, 2017, but not anymore. According to Variety, Disney is pushing back the release date to December 15, 2017.  Pirates of the Caribbean: Dead Men Tell No Tales will instead open in the May slot. Pirates was originally scheduled to open on July 7, 2017 against Spider-Man with Tom Holland in the lead role.

The only movie on the schedule right now to open against Star Wars in 2017 is Ready Player One. Steven Spielberg is directing the movie based on Ernest Cline’s 2012 book of the same named.

Baywatch Movie Set For May 19, 2017 Release, Terminator Over

The Baywatch movie starring Dwayne Johnson and Zac Efron will be released in theaters on May 19, 2017. A solid opening date is great for fans who want to see Efron and Johnson as lifeguards. It’s also great for those for those who wants to see Alexandra Daddario as Summer and Kelly Rohrbach as Pamela Anderson’s iconic C.J. Parker. Also, let’s hope Priyanka Chopra is actually going to be in the movie.

The Baywatch announcement is not great for Terminator fans. The  reboot trilogy that Terminator: Genisys was supposed to start is apparently not happen as it was pulled on the schedule in place of Baywatch.