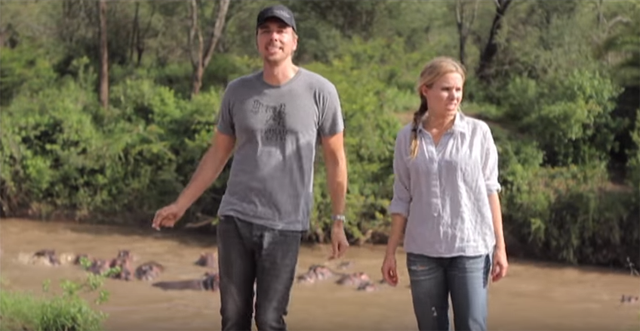 A rather amazing video was released on YouTube yesterday featuring Dax Shepard and Kristen Bell, who married in 2013 and have two children together.

The pair took their last “pre-kids” trip to Africa sometime before settling down to have children and filmed an amazing music video while there. The video features the pair lip-synching in various locales to Toto’s “Africa” while various exotic animals frolic in the background.

UPDATE: It was first reported back in 2012 that Shepard and Bell were fined for making the video while in Africa.

Dax and Kristen do Africa Kristen Bell rose to fame as the lead character in the Veronica Mars series that ran from 2004-2007. She again took on that role in the 2014 Veronica Mars movie that was funded by a highly-successful Kickstarter campaign that raised $5.7 million. Her voice has also been quite successful, first as the narrator for Gossip Girl‘s entire run and then as Anna in Frozen.

Dax Shepard has starred in Parenthood since 2010 as Crosby Braverman. He stars in the upcoming CHiPs movie, which he also wrote and directed. Bell will also appear in the film.

The pair met at a mutual friend’s birthday party and got engaged in 2010. They didn’t marry until because of a vow to not get married until same-sex marriage became legal.