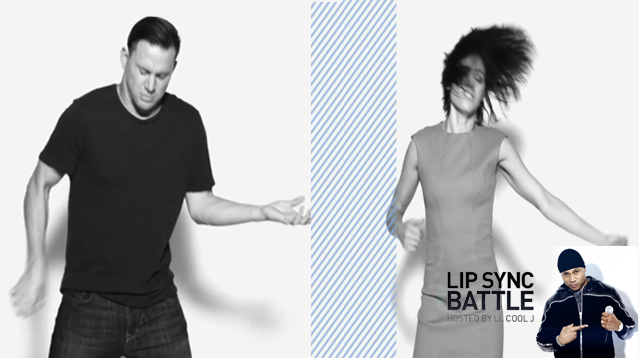 On the season two premiere of Lip Sync Battle on Spike, Channing Tatum took on his wife, Jenna Dewan-Tatum, in an epic lip sync battle.

The first clip of the show released featured Channing performing “Let It Go” from the movie Frozen while dressed as Queen Elsa.

Channing performing “Let It Go” from FrozenIn a performance not yet released as a clip on YouTube, Paula Abdul joined Dewan-Tatum for her first performance of the night, Paula’s 1989 hit “Cold Hearted Snake”. Click the full episode link below to see it.

The featured battle on the episode saw Jenna Dewan-Tatum performing Ginuwine’s “Pony” in a parody mashup of her husband’s performances from Magic Mike and Magic Mike XXL.

The performance was followed by her husband performing ‘Run The World (Girls)” by Beyonce. His performance was capped by the appearance of Beyoncé Giselle Knowles herself. That would be the same Beyoncé performing with Coldplay at halftime of Super Bowl 50. It’s safe to say the crowd enjoyed the guest appearance.

We won’t spoil the ending by announcing the winner, but you can watch the full season 2 premiere episode of Lip Sync Battle featuring Channing Tatum vs. Jenna Dewan Tatum on Spike.com.

Lip Sync Battle airs at 10/9c on Spike. A previously released trailer for season 2 of Lip Sync Battle revealed that Christina Aguilera, Kevin Hart, Cee Lo Green and Hayden Panettiere are among the stars set to appears over the course of the season, so make sure to tune in for a great season.