St. Louis Rams Win And Get Post-Game Speech From Jay-Z

The St. Louis Rams ended a five-game losing streak yesterday with a 21-14 win over the Detroit Lions yesterday at the Edward Jones Dome. Todd Gurley ran 16 times for 140 yards and 2 touchdowns. Trumaine Johnson had a huge game on the defensive side of the ball. He kept Lions wonder-receiver Calvin Johnson in check and opened the day’s scoring with a 58-yard interception return for a touchdown in the second quarter. Johnson’s “pick-6” was the first for the Rams since 2014 and the first against the Lions since 2013.

Understandably, lots of praise for the win was put on the back of Todd Gurley. Jay-Z, whose Roc Nation company represents Gurley, was in a suite at the game and came down to the St. Louis locker room after the game to congratulate the team.

The St. Louis Rams are back in action on Thursday night at Edward Jones Dome as they face Jameis Winston and the Tampa Bay Buccaneers. The teams will be wearing their “Color Rush” jerseys, which were unveiled last week and have caused the Twitter-verse to coin the game the “Condiment Bowl” 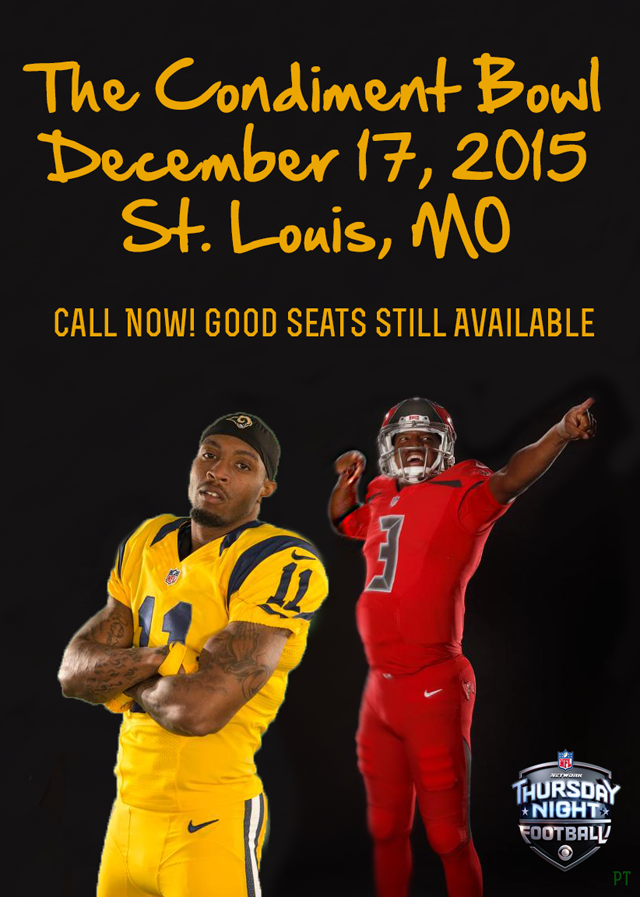 The trailer for the sequel to 1996’s Independence Day was released yesterday and lit the internet on fire. Independence Day: Resurgence stars Liam Hemsworth, Joey King and Maika Monroe and hits theaters on June 24, 2016.

A website has been set up in connection with the new film. Entering The War of 1996 website allows you to explore the timeline of events that happened in the fictional Independence Day universe between the first film and the upcoming one. It reveals that on April 27, 2007 Col. Hiller, played by Will Smith in the original film, was killed while testing an “alien hybrid fighter”. This explains Smith’s absence in Independence Day: Resurgence.

The gossip mill was above over the weekend with rumors that Justin Bieber and Kourtney Kardashian may be dating. Bieber posted a picture of him straddling a woman that people believed to be the “reality star”. Turns out it wasn’t actually her, but Kardashian and Bieber did hang out at his hotel early Saturday morning.

Gossip magazines like Ok! are saying that Prince Harry (31) and Pippa Middleton (32) are secretly dating. The magazine reports that the two have been flirting since the wedding of Prince William (Harry’s brother) and Pippa’s sister, Kate Middleton. It is even rumored that Kate caught the pair getting cozy at the wedding.  In case you were wondering, a wedding between the two would be legal.

The St. Louis Science Center will be showing Star Wars: The Force Awakens in the 70mm IMAX format, which is set to be the best film technology out there. The movie is only showing in this format in 15 places around the world. Showings on Thursday and Friday of this week are currently sold out, but showings on Saturday and Sunday still have seats available. Tickets are $15.50 for adults with discounts available for college students, those in the military and SLSC members.

Need to get caught up on Star Wars? Need to know what to wear to the premiere of The Force Awakens?

Someone apparently leaked the German trailer for Star Trek: Beyond earlier today. It was expected to be released later this week, but Paramount has released it now in light of the leak.

With only estimates in right now from over the weekend, The Hunger Games: Mockingjay – Part 2 topped the weekend box office for the fourth weekend in a row. The numbers are close this weekend, however. Mockingjay sold an estimated $11.3 million worth of tickets in its fourth weekend of release, but In The Heart of the Sea was close behind with $11 million in its debut. The Good Dinosaur was also close behind with an estimated $10.5 million in its third weekend of release.

Check back on Thursday for my Weekend Movie Guide. I’ll take a more in-depth look at the weekend box office numbers as well as preview new releases, see what movies are making their way to Keller 8 and tell you what’s new to rent at your local Redbox.

Aside from Star Wars: The Force Awakens opening this weekend, Sisters, Alvin and the Chipmunks: The Road Chip and Extraction also open this weekend.

Adele Performs On X-Factor Finale, But Not Live

Adele debuted a new, shorter hairstyle on the finale of the British edition of The X-Factor last night and sang her hit, “Hello”. Simon Cowell and the other show-runners promoted Adele’s performance as “live”, but in fact it was pre-recorded two hours before the show, according to reports, which angered many fans on social media. One Direction also performed on the show.

Adele performs on The X-Factor finale

Reese’s has been under fire a bit for their Peanut Butter Trees not exactly looking like perfect trees. The company has responded on Twitter with a series of clever tweets.

With the team starting this season 0-6, Andrew Haines, the owner of the St. Louis Ambush has decided to “part ways” with head coach Daryl Doran and assistant coach Joe Smugala. Doran is the only coach the team, in its third season, has ever had. Haines’ Ambush team went 4-16 in its inaugural season and 8-12 last season.

Doran IS indoor soccer in St. Louis. He left Saint Louis University after his freshman season to play for the St. Louis Steamers in 1982 and has been a fixture on the scene ever since. He played with the Steamers until they folded in 1988, spent a season in Los Angeles and then played for the Steamers/Ambush back in St. Louis until the team folded in 1999. He also played for the second incarnation of the Steamers in their 2000 and 2001 seasons and from 2003-2005. He served as player/coach on those Ambush teams from 1992-1999.

When an ownership team led by Andrew and Leah Haines announced they were bringing indoor soccer back to St. Louis in 2013, they named Doran as the team’s head coach.

Coat Of Many Colors Becomes Most-watched TV Movie Since 2012

Dolly Parton’s Coat of Many Colors premiered last Thursday on NBC and 12.8 million viewers tuned in. Excluding sports and live musicals, it gave NBC its most-viewed show since the ER finale in 2009. The movie, the first in a planned series of tv movies based on Parton’s songs, also became the most-watched broadcast tv movie since 2012.

Dolly Parton’s Coat of Many Colors is now available to stream in its entirety on Hulu. Jennifer Nettles has drawn solid reviews for her portrayal of Parton’s mother, while Alyvia Lind has been praised for her role as Dolly Parton in her younger years.

Miley Cyrus released the music video for her song “BB Talk” over the weekend. The video is a wee-bit crazy with Cyrus dressed as a baby and….well… I don’t even know what else to say. Beware, the language isn’t exactly “safe-for-work”.

Netflix will debut its latest series, the docu-series Making A Murderer, this Friday, December 18th. The series focuses on Steven Avery and comes from directors Laura Riccardi and Moira Demos, who spent ten years on the project. Avery was convicted of rape in 1985 and then released by new DNA evidence in 2003. In 2005, he became the prime suspect in the murder of Teresa Halbach.