Each Tuesday we compile our favorite covers of the top 5 songs on the Billboard Hot 100. Here is this week’s edition of The Billboard Top 5 : Covered featuring Morissette Amon, the Haschak Sisters, Daniela Andrade, AURORABRIVIDO and Connor Maynard.  They cover the hottest songs in the country right now by the likes of Adele, Justin Bieber and Drake. This week also features a bonus cover of Luke Bryan and Karen Fairchild’s “Home Alone” tonight by Chris Scott and Amy Schimdt, who are both from the St. Louis area.

It’s also the time of year to feature holiday songs. This week, we have Michael Buble and Celine Dion performing John Lennon’s “Merry Xmas (War Is Over)” on Michael Buble’s Christmas In Hollywood special on NBC. 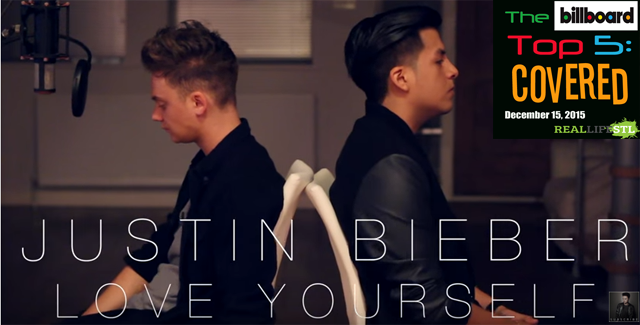 #4 “What Do You Mean” Justin Bieber

AURORABRIVIDO covers ‘What Do You Mean?” by Justin Bieber