Where To Watch UFC 193: Ronda Rousey vs Holly Holm Around St. Louis 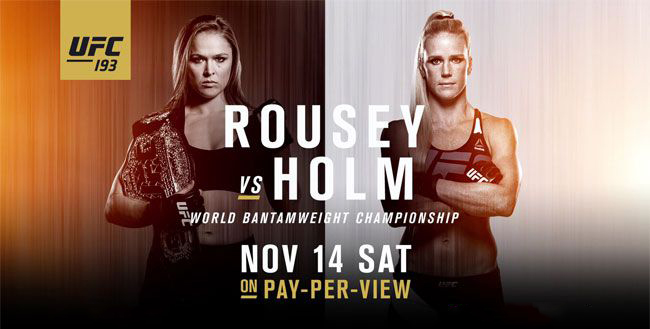 Ronda Rousey takes on Holly Holm at UFC 193 in Melbourne, Australia this Saturday night. The Rousey-Holm fight for the UFC Women’s Bantamweight Title highlights the card that also features Mark Hunt vs Antonio Silva and Joanna Jedrzejczyk vs Valerie Letourneau.

Ronda Rousey, the former Olympic Judo medalist, Maxim columnist, actress and UFC Champion, is currently 12-0 in the UFC. “Rowdy” was recently featured on the cover of Ring Magazine, a boxing magazine owned by Oscar De la Hoya, much to the dismay of Floyd Mayweather.

Ronda Rousey also has a thing for aliens and UFOs.

UFC 193 Embedded
Holly Holm is three fights into her five-fight UFC deal and sits at 3-0. However, this fight will be kind of separate from that deal. Holm’s manager had the foresight to put a clause into her original entry-level contract to include a separate clause giving her more money should she step into the octagon with Rousey. A former opponent of Holm’s, Raquel Pennington, isn’t exactly placing money on “The Preacher’s Daughter” to beat Ronda Rousey.

The Official Ronda Rousey Fan Club, Arm Bar Nation, will be holding their UFC 193 watch party at Tamm Avenue Grill in St. Louis’s Dogtown neighborhood. A $5 ticket ($6.17 after fees) gets you into the event and entered to win one of the sweet prizes they are giving away. Among the prizes advertised are Monster headphones, signed Ronda Rousey prizes, clothing, posters and more. The party starts at 7 pm.

Get Your Tickets To The Armbar Nation UFC 193 Watch Party

Ballpark Village does not have any special events planned for Saturday night, but they will be showing UFC 193 starting at 9 pm. With their 1,200 square foot video wall, it’s an excellent place to watch a UFC fight.

Larry Flynt’s Hustler Club across the river is advertising that they are showing UFC 193. No word if they are charging a cover or what. I think my job so, I didn’t want to dig into the site and get a call from HR. Call 618-874-9334 or click the link above for more information.

Many Buffalo Wild Wings locations throughout the area will be showing UFC 193. While there isn’t a cover charge, you advised to get there around 6 pm if you want a table.

All of the Hooters locations around the St. Louis area will be showing UFC 193. Like BWW, no cover charge but get there early and don’t freeload.