John Oliver addressed prisoner re-entry this week on Last Week Tonight. In light of the release of 6,000 low-level offenders sentenced under mandatory minimum “war on drugs” policies, Oliver talked about the challenges that these people will face trying to reenter society. Oliver also interviewed Bilal Chatman, who was recently released from prison.

The latest James Bond movie, Spectre, easily took the weekend box office crown with an estimated $73 million in receipts in its debut. The Peanuts Movie also opened strong, with an estimated $45 million. Spectre was right in line with the box office prediction we cited in last week’s Weekend Movie Guide, while Peanuts was a bit above its prediction. The Martian earned an additional $9.3 million to bring it closer to the $200 million mark domestically.

Overall, the box office was up 122.4% over last weekend’s dismal numbers.

Check back with RealLifeSTL on Thursday for my Weekend Movie Guide. I’ll take a deeper look at the weekend numbers, preview By the Sea, The 33 and Love the Coopers, and give you a round-up of movie news.

Rams Owner Stan Kroenke was in attendance in Minnesota yesterday to watch his St. Louis Rams lose a nail-biter to the Minnesota Vikings. He used the restroom at least three times. Neither of those things would be big news by themselves, but the fact that he had his security team close off the press box restroom so no one else could use it while he was in there makes it a bit ridiculous. Some journalists were not very pleased with Kroenke. 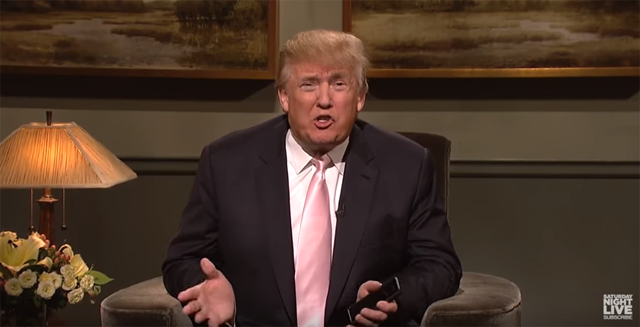 Check out Donald Trump’s opening monologue. You can see more videos from the show on Saturday Night Live‘s YouTube channel.

Lyft and Justin Bieber are partnering to promote his new album, Purpose. Lyft users will be able to take a ride in “Bieber Mode” starting on November 13, the same day the new album comes out. Any rider who spends at least $5 on a ride in Bieber Mode will be able to download the album for another $5 and receive a $5 Lyft credit for a future ride. The promotion runs from November 13-16.

The President of the United States of America is now on Facebook. President Obama made the first post, a video, on his new Facebook page this morning. While the name on the page is President Obama, the page is actually for the office, with the page’s official name being “POTUS” on the site.

Hello, Facebook! I finally got my very own page. I hope you’ll think of this as a place where we can have real…

The band Mumford & Sons will be returning to St. Louis on April 16, 2016 for a show at Scottrade Center. Kevin Johnson of the St. Louis Post-Dispatch reports that tickets will go on sale this Friday at 10 am with all tickets being $59.50.

Reggie Bush suffered a season-ending injury when his San Francisco 49ers came to St. Louis a few weeks ago. Bush slipped on a stretch of slick concrete that rings the turf and tore his ACL, ending his season and possibly his NFL career. Bush has hired an attorney and plans to sue the city of St. Louis, which technically owns the Edward Jones Dome.

Red “Holiday” Cups At Starbucks Not Going Over Well

Some people are a little worked up over the new red “holiday” cups at Starbucks. At least one religious nut equates snowflakes not being on the cups to some crap about the coffee chain hatin’ on Jesus.

This nut who looks a bit like Kevin James but claims to be a man named Joshua Feurerstein posted about the cups on Facebook and encouraged people to do the same using the #MerryChristmasStarbucks hashtag.