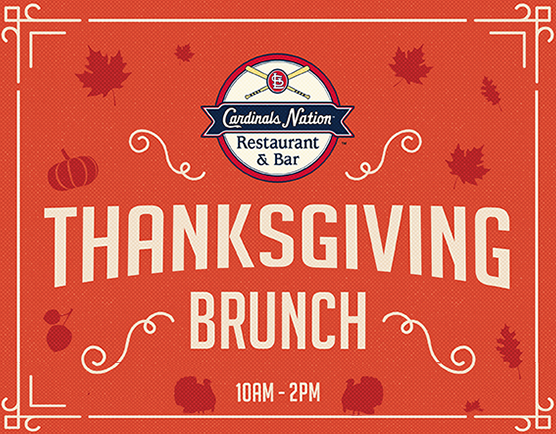 The Cardinals Nation Thanksgiving Brunch at Ballpark Village definitely has one thing that no other buffet on this last has. Admission into the awesome St. Louis Cardinals Hall of Fame & Museum is included with the price of the brunch. The brunch will also feature “typical breakfast fare”, familiar Thanksgiving dishes, other lunch items and house-made desserts. Your meal price also includes soda, coffee or tea and one (1) adult beverage. Parking in the Ballpark Village lot is complimentary.

Bristol Seafood Grill is offering a Thanksgiving Day Buffet at its locations in Creve Coeur and O’Fallon, MO. Bristol’s offering is one of the longer ones in the area, running from 10:30 AM – 7 PM. The menu is highlighted by dishes like Cornbread & Sausage Stuffing and Maple-Glazed Ham with Honey Wine Sauce.

The Thanksgiving Buffet at Cielo is definitely for the foodie. At $90 per adult, it’s a wee bit extravagant. Once you look at the menu, the prices makes a bit more sense. An elaborate charcuterie station is followed by soup option of Braised Rabbit Stew or Smoked Gouda & Wild Mushrooms. Turkey is joined by prime rib, pork loin and snapper. Among the pastas are a Pumpkin & Roasted Apple Risotto, Lobster Ravioli and Turkey & Buratta Ravioli. A “selection of Italian pizzas and desserts” round out the menu. A Kid’s Corner includes cheese nachos, chicken nuggets and mini burgers.

Valet parking at the Four Seasons is included with the meal.

The restaurant is also offering a “Thanksgiving To Go” option for $325, which will feed 10-12 people.

The Thanksgiving Buffet at Candicci’s in Ballwin is highlighted by the four meats on the menu, turkey, ham, Slow Roasted Top round of Beef and Hickory Smoked Pork Loin. Aside from the typical Thanksgiving fare, Candicci’s will have some of the restaurant’s own favorites like toasted ravioli, homemade bread and Tutto Mare, a seafood pasta.

Golden Corral definitely wins for most options on their Thanksgiving Day buffet. The buffet-goers paradise advertises “all your holiday favorites, plus steak & shrimp!” You’ll also find fried chicken, pot roast shrimp, pasta and pizza. Their salad bar features over 50 toppings according to the website.

Prices and hours will vary depending on location. The Golden Corral on South Lindbergh in South County will be serving the full Thanksgiving buffet from 10 M – 6 PM. The price for adults and children is the same, $13.99

Eat Up at Hollywood Casino

The Eat Up Buffet Experience restaurant inside Hollywood Casino will be serving a Thanksgiving menu from 11 AM until close on Thanksgiving Day for $21.99 per person. The menu will feature Roasted Herb Turkey and Bourbon-Cherry Glazed Ham as well as Southern Fried Chick, Honey-Mint Glazed Carrot and Parsnip and more. For dessert, Pumpkin Gooey Butter Cake and Praline Cheesecake are among the choices.

Want to really do something out of the ordinary this Thanksgiving? Check out the Grand Thanksgiving Buffet at Innsbrook Resort. The resort isn’t really that far from downtown St. Louis. It’s about an hour if you take I-64 West to I-70 and then head south from Wright City. At $28 for adults, it’s one of the cheaper options among our list. You won’t find the extravagant things you’ll find at the Chase or Four Seasons, but you will find plenty of hearty options on the menu. There will also be a Potato Bar and Bread Display.

If two hours of driving in one day is too much for you, 1, 2 & 3-bedroom condos on-site around Lake Aspen are available to rent.

Don’t want to eat or cook at home, but don’t really want the buffets either? Check out some other restaurants open for Thanksgiving with this list from the Riverfront Times or this one from Ian Froeb at the St. Louis Post-Dispatch.

Are you hosting the family at your house and just checking out this list secretly wishing you weren’t? Here are some ideas on what to do with your Thanksgiving leftovers.