The Tigers moved to 4-0 with the win over Wake Forest. The team next plays tomorrow evening in Columbia against SIU-Edwardsville. Cunningham, a graduate of Columbia Rock Bridge, leads the team with an average of 21.5 points per game. Sophie Cunningham is one of four Rock Bridge graduates on coach Robin Pingeton’s roster, including her older sister Lindsey. The other two Rock Bridge grads are also sisters, Bri and Cierra Porter. Their father, Michael Porter, is an assistant coach on the team. Their younger brother, Michael Porter Jr., is a junior at Father Tolton Catholic High School in Columbia and one of the top basketball recruits in the nation.

SLU Women Also Stay Undefeated
The Saint Louis University women’s basketball team also stayed undefeated with a win yesterday. The Billikens went to Macon, Georgia and pulled out a 68-60 win over Mercer. Sadie Stipanovich led head coach Lisa Stone’s squad with 20 points while Jackie Kemph poured in 16 of her own, all in the second half. SLU trailed 41-36 heading into the third quarter and outscored Mercer 32-19 in the fourth.
Coach Stone, in her fourth season at Saint Louis, and her team are 3-0 on the season. It’s the first time they’ve been 3-0 since the 2006-2007 team, when they started 5-0. The team plays Indiana State on Wednesday in Terre Haute, Indiana and returns to Chaifetz Arena on Saturday to face Eastern Illinois. 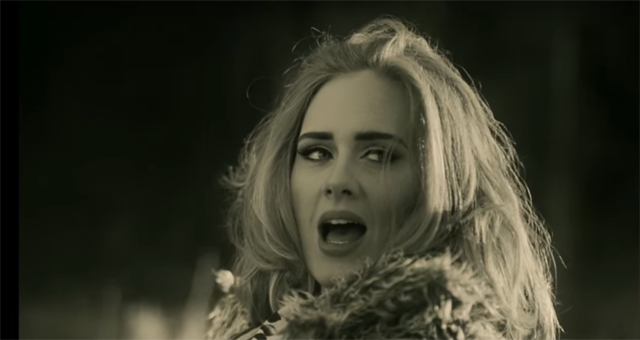 The isolated vocal track from Adele’s performance of “Hello” from the weekend’s episode of Saturday Night Live has been heating up the internet this morning. Unfortunately, NBC Universal has been taking the video offline. Adele also performed “When We Were Young”, which you can watch.

Saturday Night Live was hosted over the weekend by Matthew McConaughey. He appeared in this skit, titled “A Thanksgiving Miracle”, about the power of Adele’s music to bring families together on Thanksgiving.

In other Adele news, she transformed into “Jenny” and auditioned to be an Adele impersonator.

Adele as “Jenny” the Adele impersonator

The St. Louis Rams lost another heart-breaking game over the weekend. Ravens kicker Justin Tucker booted a 47-yard field goal through the uprights as time expired to give the Ravens a 16-13 win. Ravens quarterback Joe Flacco tore his ACL and MCL in the closing minutes for the game and is done for the season. Running back Justin Forsett broke his arm on a vicious tackle by the Rams’ Aaron Donald and is also out for the season.

In a horrendous sequence for St. Louis Rams head coach Jeff Fisher and the NFL, quarterback Case Keenum was left in late in the game after his head was smashed into the turf. Fans watching the game at local bars who were several pitchers of beer in could tell that Keenum had a concussion. Sure enough, Keenum fumbled several plays later, which led to the Ravens game-winning field goal, and was diagnosed after the game with a concussion. The NFL is investigating what the hell happened and determining who should be fired. Ok, maybe not the second part, but they did have people at the game who are specifically supposed to look for that stuff.

One would have thought that the Missouri Tigers would have found a way to win coach Gary Pinkel’s last game on Faurot Field. Betting on that thought would have been as stupid as my decision not to bring gloves or a hat to the game. Players still carried their coach off the field after the game, but the Missouri Tigers lost to the Tennessee Volunteers 19-8 on Saturday night in Columbia. The fans sitting in the stadium on a freezing cold evening weren’t exactly treated to a great game. Tennessee quarterback Joshua Dobbs scored just before halftime to compliment the Vols’ three earlier field goals and give the orange team a 16-0 halftime lead. The Vols would add another field goal to make it 19-0 before Missouri quarterback Drew Lock scored on a 1-yard run with just under 10 minutes left in the game. The Tigers would get the two-point conversion to finish the evening’s scoring.

Freshman Drew Lock would finish the day completing 13 of 30 passes for 135 yards and an interception to go with that rushing touchdown. His Quarterback Rating for the day was a paltry 11.3. Dobbs completed 16 of 24 passes on the day for 89 yards and had a QBR of 64.6.

The Missouri Tigers finish their season on Friday with a game at Arkansas. A win for the Tigers over the 6-5 Razorbacks would move them to 6-6 on the season and qualify the team for a bowl game. There is an outside chance Mizzou could lose on Friday and still make a bowl. Kick off is set for 1:30 pm on 11/27. The game will be televised on CBS.

Anna Kendrick accepted the Pitch Perfect 2’s award for Best Soundtrack at the American Music Awards last night and thanked someone for helping her hide the body of a dead hooker and a 3-way.

Justin Bieber drew raves for his performance in the rain at the AMAs.

New footage from Star Wars: The Force Awakens debuted at the AMAs and Pentatonix performed a special Star Wars tribute. The a capella group and footage were introduced by Harrison Ford.

The Hunger Games: Mockingjay – Part 2 easily took the weekend box office, but didn’t quite hit the heights other films in the franchise have. The final film in the franchise brought in an estimated $101 million in 4,175 theaters across the country. The first two films in the franchise had debuts in the $150 million range while the last film, The Hunger Games: Mockingjay – Part 1, debuted with $122 million. The latest film brought in $146 million overseas over the weekend to give it $247 million worldwide thus far.

The Night Before, which I saw and enjoyed, brought in $10.1 million in its debut while The Secret in Their Eyes debuted with $6.6 million.

Check back with RealLifeSTL on Thursday for a special Thanksgiving edition of my Weekend Movie Guide. I’ll take a closer look at the weekend box office numbers, preview movies opening this weekend and check out what’s coming to the second-run theaters and Redbox.

Opening on Thanksgiving Day this week are The Good Dinosaur, Oscar-contender Creed and Victor Frankenstein.

Sump Coffee in south St. Louis is one of 100 businesses around the country using the new Square reader. The new wireless reader is compatible with Apple Pay, Android Pay and new credit cards. Customers can hold their phones close to the reader to make payments.

John Oliver doesn’t understand why the United States still makes pennies when they cost 1.7 cents each to make. He took the topic on over the weekend on Last Week Tonight. He compares the nonsense that is making pennies to the fact that The Muppets is still on the air.