Being an expert in Haunted Houses, if you’re looking for reviews to help you choose which haunted house(s) you will be visiting this year, you’ve come to the right place.

Let’s start with the basics. 1. Haunted houses are meant to scare you.  If you’re not interested in being scared, maybe throw a Halloween party instead. 2. They’re attractions; they’re meant to be fun and thrilling. If you’re one of those “This isn’t real, blah-blahbitty-blah” people, then maybe checking out real haunted places would be best for you. Skip to the bottom of this post to find some of those around the St. Louis area.

Now for the rest of us who enjoy a great haunted attraction experience. Here’s a list of my Top 3 haunted houses (in order) based on my years of haunted house explorations.

#1. CreepyWorld in Fenton – There is no question that this haunted house is the best. This is the longest, scariest and most worth your money haunted attraction in St. Louis. Now open Thursday through Sunday (times vary – only open from 7:30-10pm on Thursday & Sunday), they expanded yet again and have 13 haunted attractions including 2 new attractions: Trick ‘R’ Treat Haunted Hayride and Quarantine: World War Zombie all in one place! You are literally non-stop scared for over an hour. Talk about a work-out; you just run (like for real run) from one attraction to another, from the foggy camouflage room to the black-out meat room where you run into pig carcasses hanging from the ceiling to the Haunted Hayride. It’s over an hour of heart pounding, adrenaline pumping, sweating, screaming, and running terror. If you’re not in good shape, you will be physically exhausted. If you are in good shape, no need to work-out the next day. *My only warning-if you’re not comfortable with being chased repeatedly by scary men with chainsaws and getting (what I assume is) fake blood on your clothes, this is NOT the place for you. Online tickets are $25, $30 with Haunted Hayride, and $36 w/ Speedpass (I highly recommend if going on Friday, Saturday, or Halloween week).

#2. The Darkness in Soulard – Now open Thursday – Sunday(times vary – only open from 7:30-10pm on Thursday & Sunday), they have 6 attractions in one location (although not all are a haunted attraction). Let me start by saying I love the “Dead Groom” guy who stands outside and sneaks up on people waiting in line. Every year he dresses up and creepily proposes to women waiting in line. It’s something to keep everyone entertained. I would also agree that they have the best special effects of all the haunted houses. However, as far as being “the scariest” goes, I would have to disagree when comparing them to CreepyWorld. I remember visiting in high school and being completely terrified. It was much more focused on scaring people rather than the special effects then. It’s almost more of a cool scary stuff museum than a raw scare-the-shit-out-of-people attraction now. However, they do have 2 new features this year: Silo X Zombie Laser Tag and a 3 Minute Interactive Horror Escape Room. Online tickets are $25 or $30 with Silo X admission or $36 w/ Speedpass (again, I highly recommend on Friday, Saturday, and Halloween week). Zombie Laser Tag is an additional $20. 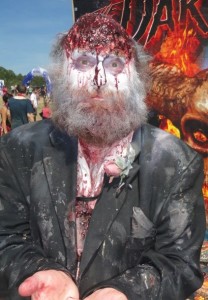 #3. The Abyss at Lemp Brewery – Opens Friday the 13th. Days and hours  vary but it will be open Friday & Saturday starting 10/3 from 7-11:45pm. The Lemp calls it’s haunted attraction The Abyss. I gave them the benefit of the doubt after they made some changes a few years ago, but ultimately was not super impressed. Going 5 stories underground definitely gives it the creepy factor, but after walking down the stairs in the dark wondering if something is going to touch the back of my legs from under the stairs, the scare factor sizzles out. I recommend touring the haunted Lemp Mansion first (since they say the brewery is really haunted), and hearing the story of the Lemp Family and their hauntings to maybe heighten the experience.

If you really love haunted houses and you have the money, get the Halloween Extreme ticket and visit all 3 for $57 which includes the Speed Pass. You can also get up to $5 off coupons e-mailed to you. And finally, while I haven’t seen any yet, be on the lookout for Groupon and Living Social deals.

Here are a couple other haunted attractions that are worth a mention:

#1. Frightfest at Six Flags – It’s been many years since I’ve been to Six Flags during Frightfest and a lot has changed and been added, but you basically get to enjoy all the rides that Six Flags has to offer plus additional Halloween attractions like Zombieville, where you walk through a section of the park with zombies, Sinister Clowns, and Vengeful Trolls, plus other fun frights. While I don’t remember it being very scary, a whole day of Six Flags rides plus additional fun Halloween attractions sounds like a good day to me. Be aware, some of the haunted attractions are not included in the admission ticket price. You have to buy a separate pass for them. And if you really want to make a night of it, check out Red’s Corn Maze Massacre and Farmer Bob’s Haunted Hayride before you head home. It’s a 22-acre haunted corn maze in Eureka, just 7 miles from Six Flags. I haven’t been but I’ve heard it’s fun. It’s only open Friday & Saturday and costs $13 for the maze and $20 to add the hayride (cash only).

#2. Haunted Paintball Hayride and Creepy Trail Zombie Hunting: Opens October 7th. There are always tons of deals out for this. It’s located in Millstadt, IL, so it’s a bit of a drive over the river for St. Louisans, but I’ve heard it’s pretty awesome. You jump on a haunted hayride and shoot down live zombies, ghosts, and monsters. Once you get off the hayride, you walk (or run) through a zombie-infested haunted trail. There’s also a Walk-Through Zombie Hunt which is a whole separate event with shotguns and face masks and waivers that have to be signed. It all sounds awesome! The hayride+trail ticket is $29. Check out Groupon and ApDailyDeals for some discounts.

#3. Phobius: This attraction is located in  Wright City, which is a  pretty far drive from St. Louis  City.  As a haunted house lover, I’m willing to make a long drive for a hidden gem and this one has seemed to pick up some speed and received some pretty great reviews, so it may be worth the trip. Check out the reviews for yourself and see what you think. It’s open Fridays & Saturdays from 7-11pm.

Now for those not interested in haunted attractions. If you want to witness the “real thing,”check out one of these haunted tours.

#1. The Lemp Mansion: The Lemp Mansion is on America’s top list of most haunted places. The story is that the Lemp family committed suicide in the house and still haunt it to this day. You can take a tour, eat dinner, and even stay the night.

#2. Alton Hauntings Tour: Alton is one the most haunted small towns in America. There are both walking and bus tours that take you through a tour of the town with stories of the real history of the deaths, disasters, murders and ghosts of Alton. The tour is based on the book Haunted Alton

, which sounds like a pretty cool read to get you pumped up for the tour.

#3. Fabulous Fox Ghost Tours: Tour the Fabulous Fox, which is rumored to have ghostly spirits roaming the halls along with other unexplained sightings and phenomenons. In addition to the tour, there will be specialty cocktails, tarot card readings, psychics, and seances from members of the St. Louis Paranormal Research Society. The days are Oct 16, 23, and 30. Tickets are $40 and they sell out, so get yours in advance.

#4. Haunted History Tour: David Riordan, a world class storyteller whose family has lived in St. Louis for over 180 years, offers walking tours of the haunted streets of St. Louis. The tour starts at Morgan Street Brewery on The Landing. David tells stories of the Great St Louis fire, the Exorcism that sparked a famous movie, the Cholera epidemic, Bloody island and more as he weaves his way through The Landing to the Arch Grounds. The tour has received great reviews and it sounds like St. Louis has a bit more of a haunted history than I’d like to think about.