Fraternities and Sororities like to hold theme parties on college campuses because college kids like to have fun. Sometimes the themes push the envelope. The Sigma Phi Epsilon fraternity and Alpha Phi sorority at UCLA recently held a “Kanye Western” party. Protests were held on campus about the party and rumors that students wore “blackface” to the party, according to media outlets.

The thing is though, no one wore black or brown paint on their faces to the party. No photos exist and the Sigma Phi Epsilon chapter denies anyone wore “blackface” to the party.

Most people probably guessed that Pan, with a budget of $150 million, would flop the minute they saw the trailers. The film did bring in $25 million overseas, making things look just a tad rosier. Mashable broke down the numbers on the “worst blockbuster of 2015“.

Check back with RealLifeSTL on Thursday for my Weekend Movie Guide. I’ll take a closer look at the weekend box office numbers and preview the films opening this weekend, Goosebumps, Crimson Peak, Bridge of Spies and Truth. 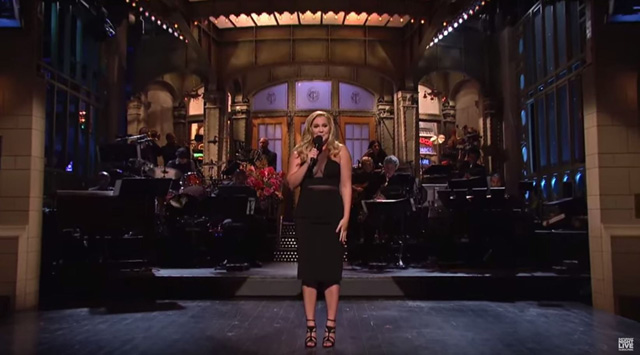 Amy Schumer hosted Saturday Night Live over the weekend and received some good reviews. One of the sketches, “Guns”, is below.

Amy Schumer also talked about female role models, Bradley Cooper and how excited she was about hosting SNL in her opening monologue.

And a flight attendant in “Delta Flight”

John Oliver takes a look at North Dakota and all of its great tourist attractions in this week’s edition of Last Week Tonight. Ok, it actually looks at the scary things oil drilling has done to the state.

Reports are surfacing that Taylor Swift and Calvin Harris have broken up. One report says that Taylor dumped Harris after he was seen leaving a massage parlor in Thailand.  Another says that Harris couldn’t handle the media circus around their relationship. I think Taylor, the queen of Instagram, woke up and realized that she’s a huge star and Calvin Harris is some DJ no one outside the UK had ever heard of before they hooked up.

For some odd reason the Metropolitan Taxicab Commission had inspectors out over the weekend ticketing pedicab drivers for not being properly licensed. It’d be one thing if the drivers were knowingly breaking the law, but they apparently aren’t aware they are even supposed to be licensed through the MTC. Even the inspector KMOX reporter Michael Calhoun didn’t appear to know why he was ticketing them.

This smells a lot like the time the inept MTC decided they had authority over the BarCycle when they actually don’t.

Boeing officially unveiled microlattice back in 2011, but this video showcasing the product just went up on YouTube.