I’ve read several articles recently about models and fashion writers who are from St. Louis who were part of New York Fashion Week 2016. One was titled “Fashion Week’s Most Fabulous Are From St. Louis.” And while I appreciate supermodel Karlie Kloss and other models who are making their fashion week debuts, these articles failed to mention someone else who is fabulous and was also a big part of fashion week: Kelly Bileddo.

No, Kelly is not a model, she is a master artist for Sexy Hair and owner and founder of Salon Antebellum in South County. She was one of 5 stylists chosen to do the hair of the models who walked in Betsey Johnson’s “The Curious Case of Betsey Button” collection show at NYFW. Betsey received the Geoffrey Beene Lifetime Achievement Award in June this year from The Council of Fashion Designers of America and was showcased at NYFW. She celebrated her 50th anniversary runway show at fashion week and was the highlight of the event. So it would be a true honor for any stylist to be chosen to be part of this show.

Kelly’s personally designed hairstyle, submitted directly to Betsey, was one of 3 chosen to be presented on the runway models, 1 look per collection. The collection represented the evolution of Betsey, 5 decades – from her most recent collection to her childhood dance days, with hairstyles to match. Kelly’s styles were paired with Betsey’s 70s Punk collection. 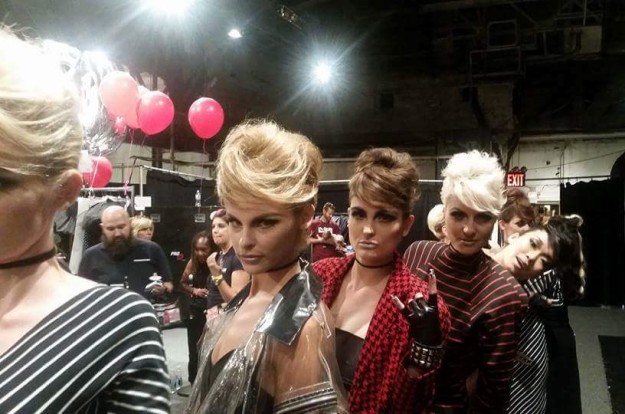 As a woman who became a mother at a young age with over 10 years of experience in the industry, she has achieved so much. Kelly’s motto is “you can make anything happen when you put your heart and mind to it”…and she has done just that. She has been a spokesperson for the National Academy of the Arts St. Louis, became an educator for Sexy Hair in 2007, became the owner of her own salon in 2012, and has now reached the runway.

I certainly agree that fabulous people come from St. Louis, and Kelly is one of them.