The 2015 MLB All-Star festivities begin tonight in Cincinnati with the Home Run Derby. In a change of pace for this year, the eight participants were seeded based on their current home run totals and placed in a bracket. Albert Pujols is seeded first overall and will face Kris Bryant of the Chicago Cubs in the first round. The other first round pairings are Joc Pederson vs Manny Machado, Josh Donaldson vs Anthony Rizzo and Todd Frazier vs Prince Fielder.

Yoenis Cespedes is the two-time reigning Home Run Derby champ, but will not participate this year. Prince Fielder is the only player among this year’s field that has previously won the event. He won it in 2009 and 2012.

The event is scheduled to start at 7 pm and air live on ESPN, but the weather may not cooperate. 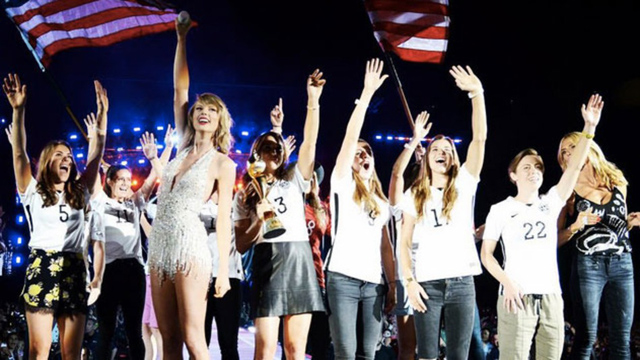 It seems like every couple of days Taylor Swift is doing something cool, like donating $50,000 to Naomi Oakes on GoFundMe.  On Friday night at her concert in New Jersey, Swift invited members of the World Cup-winning U.S. Women’s National Team to the show and honored them on stage during her performance of “Style”. She danced with the USWNT and they in turn let her hold the World Cup trophy. Heidi Klum was also on stage during the song.

John Oliver took on a topic this week on Last Week Tonight that’s hot in St. Louis right now, the public financing of sports stadiums. Oliver even touches on the NFL in Los Angeles fiasco and has some words directly for St. Louis. For you Friday Night Lights fans, Oliver channels his inner Coach Taylor.

Minions Pulls In $115.2 Million In Debut

Minions easily won the weekend box office by taking in $115.2 million in its domestic debut. The film made an additional $124.3 million overseas.

Jurassic World pulled in another $18 million to place second for the weekend and push its worldwide total close to $1.5 billion. Inside Out raked in an estimated $17.1 million for third place.

In other debuts The Gallows opened with $10 million and Self/Less opened just shy of $5.4 million.

I’ll have more on the weekend numbers on Thursday in my Weekend Movie Guide. I’ll also preview the movies opening this weekend, Amy Schumer’s Trainwreck and Paul Rudd’s Ant-Man.

Hillary Clinton To Speak On Dangers Of “Sharing Economy”

I’m not really a fan of Hillary Clinton. I think she’s a terrible choice for president. I think I support her on this stance though. Politico obtained an outline of a speech she is scheduled to give today in Manhattan that takes aim at the sharing economy comprised of companies like Uber and AirBNB. She’ll argue that companies hiring contractors instead of full-time employees with benefits is hurting the middle class.

Jordan Barnes put the St. Louis Eagles into the finals of the Nike EYBL Peach Jam in epic fashion over the weekend, but the team fell short in the finals to Team Georgia.

Down two points to Team CP3 with 4.8 seconds to go in the game, Barnes took the inbounds pass on one side of the floor and dribbled his way towards the three-point line. He pulled up from NBA-range and hung to avoid the defender in the air before sinking the perfect winner. Jordan Barnes is a Class of 2016 product that plays his prep ball for CBC here in St. Louis.

Barnes’s teammate on the St. Louis Eagles, Jayson Tatum, committed to Duke on Saturday in between games at the Peach Jam, Saint Louis University was among his final four choices.