While St. Louis doesn’t have a team at the highest level of professional soccer in this country, two of the top figures in soccer in the United States were in St. Louis last week. Major League Soccer commissioner Don Garber and Dan Flynn’s the Secretary General of the United States Soccer Federation spent a day in St. Louis meeting city leaders and learning about how soccer plans are being incorporated into plans for a new stadium downtown.

Among the people that Garber and Flynn met with during the day were St. Louis Mayor Francis Slay, Missouri Governor Jay Nixon and Dave Peacock. Peacock is of course heading up the Governor’s stadium task force. The pair spoke very highly of Slay later in the day. Slay played soccer while in high school at St. Mary’s then played at Quincy College, where he was part of three NAIA title teams. Slay also met his now-wife at a soccer game while in college and is one of the few mayors in the country with that high of an enthusiasm for the sport, according the Garber and Flynn. 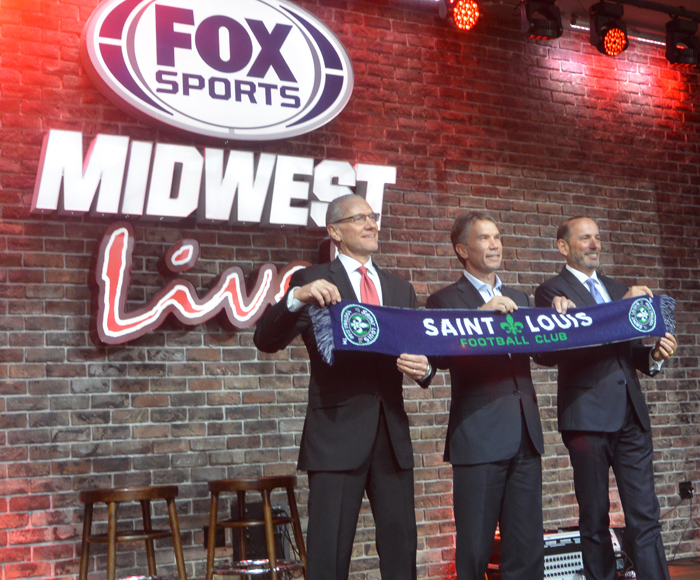 Don Garber and Dan Flynn had lunch with several St. Louis soccer dignitaries, including the Hermann family. The Hermann Trophy, given annually at the Missouri Athletic Club in downtown St. Louis to the nation’s top male and female collegiate soccer players, is named after Robert Hermann. Saint Louis University’s Robert R. Hermann Stadium is also named for him.

To end the day Saint Louis FC, St. Louis’s entry in the United Soccer League, sponsored a rally at Fox Sports Midwest Live! at Ballpark Village. Bill McDermott was the emcee for the event because there really is no other choice if you’re looking for someone to talk about soccer in St. Louis.

Bill McDermott is considered to be “Mr. Soccer” in St. Louis. He played the sport at Saint Louis University from 1967-1970 where he was part of two national championship teams. (Those 1967 and ’69 teams are just two of the 10 SLU soccer teams to win a National Championship.) In 1972 he became the public address announcer for SLU soccer and continues those duties to this day for both the men’s and women’s teams. Aside from his local duties, McDermott has been one of the top soccer commentators in the country, covering local professional matches, international friendly matches and even World Cups.

Bill McDermott’s opening monologue took the crowd through the history of soccer in St. Louis and how our city has played a part in the growth of soccer in the United States. From the first soccer game played in St. Louis in 1881, which pre-dated the formation of the St. Louis Cardinals, to the 1950 World Cup team that included five St. Louisians and beat the mighty England squad. From the success St. Louis amateur clubs saw in the early days of the U.S. Open Cup to the days of the St. Louis Stars of the NASL. In the late 1980s, the United States Men’s National Team essentially called the St. Louis Soccer Park home as they played three matches there in the qualification rounds for the 1990 World Cup.

McDermott recognized the notable St. Louis soccer figures in the crowd such as Daryl Doran. Doran, a graduate of Christian Brothers  College High School here in St. Louis played over 900 indoor soccer games during his career, including playing for every professional indoor soccer team St. Louis has had dating back to his first game for the Steamers in 1982. Doran is currently the coach of the St. Louis Ambush of the Major Indoor Soccer League. Pat McBride, who played for SLU and the St. Louis Stars (as well as 5 caps for the National Team) before becoming a very successful college coach in the area, was among the others recognized.

After McDermott’s opening remarks, Garber and Dan Flynn took the stage separately to take questions from McDermott. Garber had previously announced plans for Major League Soccer to expand to 24 teams by 2020.  He stressed on stage how much he loves St. Louis as a soccer city and gave the audience the impression that a new riverfront stadium would go a long way towards putting St. Louis in line for an expansion team. The league has previously stressed its desire to have its teams playing in soccer-specific stadiums in urban settings. While the new riverfront stadium wouldn’t be soccer-specific, Garber did look at HOK’s stadium renderings and liked the idea of an MLS team playing in it. If the stadium does get built, the current timeline calls for it to be ready by 2020. Public funding for the stadium is crucial and an important lawsuit is set for its first hearing this Thursday.

Both Garber and Flynn stressed to fans in attendance that seeing St. Louisians out en masse supporting the local United Soccer League team, Saint Louis FC, would impress the top-tier league brass. Through 5 league games, the team is averaging 4,633 fans per game at Marshall Wireless Stadium at World Wide Technology Soccer Park in Fenton. The stadium seats just over 5,000 fans for games. Saint Louis FC’s attendance figures rank in the top half of the league, by most accounts. Saint Louis FC  is owned in part by World Wide Technology CEO Jim Kavanaugh and has strong ties to the St. Louis Scott Gallagher Soccer Club.

The relatively strong attendance for Saint Louis FC games is the latest example of the strong support for the sport in St. Louis. 48,263 fans showed up to see Manchester City take on Chelsea in early 2013 at Busch Stadium while 30,397 fans saw Bosnia take on Argentina at Busch later in the year.  Just a couple on months ago, 35,817 tickets were sold for a friendly between the U.S. Women’s National Team and New Zealand. That attendance figure set the record for the largest crowd to watch a stand-alone USWNT friendly on US soil.

A good portion of this fan support can be traced to the St. Louligans. The Louligans are a group of proud St. Louis soccer fanatics that have become quiet the fixture at professional soccer matches around town. The group formed after several smaller supporters groups met during the days of AC St. Louis.

Speaking of the USWNT, two St. Louisans will be on the team as they head to Canada for the 2015 Women’s World Cup. In Flynn’s comments on stage he noted what a unique feat it was to have two players from the same town on the team at the same time. Lori Chalupny and Becky Sauerbrunn are the latest in a long line of St. Louisans to make a impact at the highest level of soccer. More than 70 players from St. Louis have seen time with the U.S. Men’s National Team and there as been at least one St. Louisan on every World Cup team on the men’s side. 29 St. Louisans have been elected to the National Soccer Hall of Fame through the years.

St. Louis has plenty of momentum going in its quest to get a Major League Soccer team playing within the city limits. What transpires in the next few months with Dave Peacock’s plans for the stadium on the north riverfront will go a long way towards determining if the dreams of soccer fans here like the St. Louligans will become reality.

In the meantime, it can’t hurt to have two of the top figures in U.S. soccer supporting soccer in St. Louis.