Downtown St. Louis will feature a 1,000-foot water slide down Market Street this July thanks to the folks at Slide the City.

On July 11th and 12th the giant water slide will be set up on Market Street between Jefferson Avenue and 20th Street.  Shop N’ Save and CBS Radio are partially responsible for bringing the event to St. Louis. A portion of the proceeds will be donated to the St. Louis Area Foodbank. It’s estimated that the Foodbank will receive upwards of $15,000 from the event.

Everyone is welcome to come out and watch the festivities for free, but anyone wishing to ride the slide will need to buy a ticket before they slide. Three different tiers of ticket will be available, Single Slider, Tripple Slider and Unlimited Slider. Single Slider runs $13-$24 depending on when you buy, Tripple Slider (three slides) wristbands run $25-$45 and Unlimited Slider wristbands run $5-$65.

There are some rules sliders must adhere to, such as being six years old or older and taller than 3’10”. All sliders must also be on an inflatable tube when going down the slide. 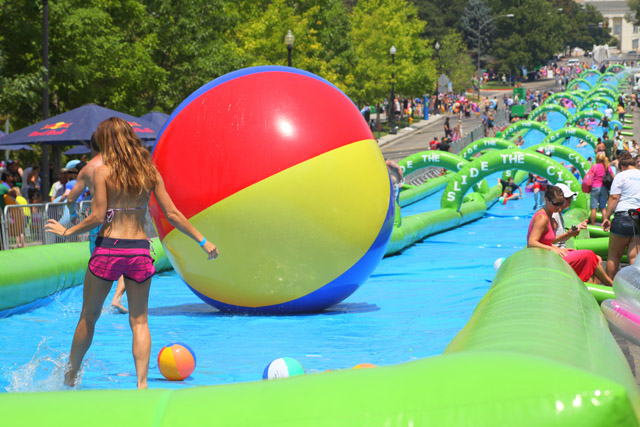 Slide the City partners with cities across the country to put on these events. Just this month, the company has events in Columbus (GA), Phoenix (AZ), El Paso (TX) and Pensacola (FL), among other cities. As far as Missouri locations go, the company has already been granted approval in O’ Fallon, Missouri to roll out their slide on July 25 and 26 along Mexico Road near Ft. Zumwalt West High School. The city of O’ Fallon is creating a huge event around Slide with food trucks, live entertainment and “other activities for slide-goers”. The company also has plans to stage the event in Kansas City and Columbia in August.

Slide the City is the brainchild of John Malfatto, who is also behind events like Dirty Dash, Color Me Rad and Lanternfest. The first Slide event was held in 2013 in Salt Lake City and now the company plans to stage events in 100 locations in the U.S. and Canada in 2015. More than 4,000 sliders, on average, went down the slide in each location they staged the event in during 2014. The company typically partners with a local non-profit in each city they stage an event. In this case, the St. Louis Area Foodbank, will be the non-profit that will provide the 150 or so volunteers necessary to stage the event and will receive part of the event’s profits in return.

Tickets for Slide the City in downtown St. Louis on July 11-12 officially go on sale on May 12 through SlidetheCity.com.  Through a partnership with Shop ‘n Save, however, those interested have been able to buy tickets in advance and at a special price for a few days now. That deal expires today, unfortunately.