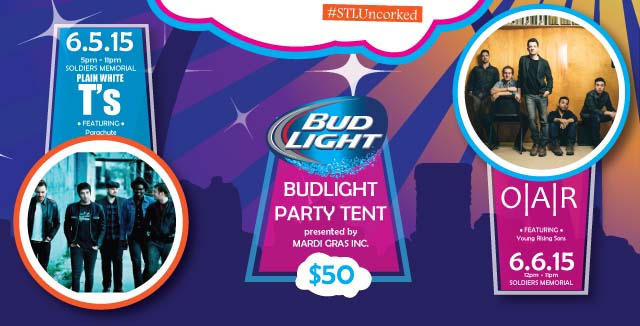 The Plain White T’s, Parachute, Young Rising Sons, St. Louis-based Clockwork and O.A.R have been announced as the musical entertainment for St. Louis Uncorked 2015. The festival, tagged “The First Sip Of Summer” will take place June 5 & 6, 2015 at Soldiers’ Memorial in downtown St. Louis.

St. Louis Uncorked is free to attend with beer and wine samplings  being sold on site. ATMs are available on-site and some vendors do accept credit and debit cards, but we do advise bringing some cash with you.

The festival will offer a host of “Uncorked Experiences” like the Lou Fusz Automotive experience, the Cutter Kid Zone, the Lipton Sparking Ice Tea Hydration Station and the Missouri Beef Industry Council Marketplace.

St. Louis Uncorked is put on each summer by the folks at CBS Radio as a kick-off to summer event for St. Louis. Last year’s event featured music from Marie Miller, Magic!, Andy Grammer and Jillette Johnson among others.

Plain White T’s and Parachute will headline the entertainment on Friday night while O.A.R., Young Rising Sons and Clockwork will play Saturday night.

There’s no official word yet on what time the musical entertainment will start each night, but at Uncorked 2014,  the openers took the stage at 7 pm and the headliners were scheduled to start their at at 9:50 pm.

New this year is the Lifestyle Stage. The event’s website advertises that the stage will entertainment ranging from “wine pairings to cooking demonstrations to performances from some of our favorite local groups”. We’ll update this post when we know more about the schedule for that stage.

Until then, enjoy some music from the bands scheduled to play Uncorked 2015 on June 5 & 6 at Soldiers’ Memorial in downtown St. Louis.