I left Facebook. Shocking, I know. To some that seems like it would be as difficult as leaving a cult. . . well, maybe it kind of is like that.  I won’t get into the reasons behind my decision other than to say it wasn’t entirely by choice, that sometimes crappy people can use social media in really creepy ways (I’m not talking about myself, just in case there was any question).

I thought it would be pretty hard; no daily updates from friends, family, or people I barely know (italics used to denote sarcasm).  I’ve found that it really isn’t that hard and while I probably will re-activate my account at some point, Facebook is definitely not a NEED for me.

There are some observations I’ve had since I quit Facebook. We’ll call them “The Top 5 Things I’ve Learned Since I said Peace Out Facebook.”

1. I feel like I am wasting less time.  I don’t sit for an extra minute or two scrolling my feed.  I used to close the text and see that icon and think “I’ll just look real quick.”  Then quick would turn into 5, maybe 10 minutes, and all the sudden I had no time to unload the dishwasher before work or realized I had to take a super fast shower before I needed to leave.

2. I feel just as connected to the people I love.  My husband would occasionally post love songs on my wall or check in somewhere commenting that he wished I was there.  Guess what?  He still tells me he misses me, but not in that exhibitionist way that posting it on social media is.  I call my mom and dad and I text, call and visit my friends.

3. I feel less annoyed.  I still get all the news. It is entirely possible to be up to date on news without TV or social media, I promise, but I don’t get all the extra stuff; stories that are obviously hoaxes striking fear and spreading it further.

4. I wish Facebook had the component of LinkedIn where it tells you who viewed your profile. There are still ways that creepy people could get around it, but it would at least take more effort.  Maybe just when non-friends are viewing you. Rule of thumb here: if you don’t want to be friends, you probably shouldn’t be looking.

So for now, peace out Facebook. If someone wants to get a hold of me, you won’t find me there. 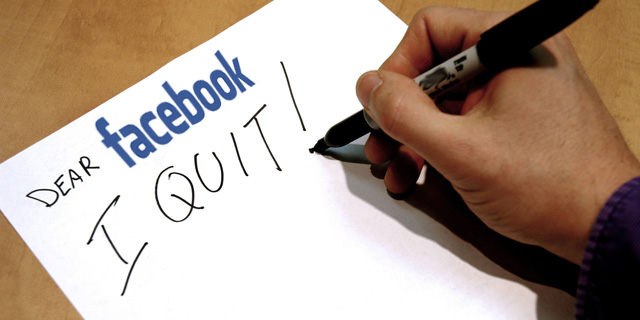