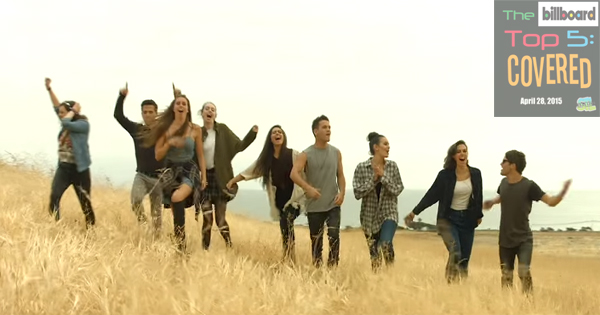 Each Tuesday we compile our favorite covers of the top 5 songs on the Billboard Hot 100. Here is this week’s edition of The Billboard Top 5 : Covered featuring Cimorelli & The Johnsons, the Shillong Chamber Choir, JR Aquino, Corey Gray and Andrew Bazzi. They cover the hottest songs in the country right now by the likes of Wiz Khalifa and Charlie Puth, Fetty Wap, Mark Ronson and Bruno Mars, The Weekend and Maroon 5. This week also features an awesome bonus cover of “Four Five Seconds”. Originally by Rihanna, Kanye West & Paul McCartney, Cody Simpson covered it in the Sirius XM studio.

JR Aquino, Brian Puspos and Andrew Garcia cover “Earned It” by The Weekend

Cody Simpson covers “Four Five Seconds” by Rihanna, Kanye West & Paul McCartney
See all of the videos featured in The Billboard Top 5: Covered in this playlist powered by Huzzaz.