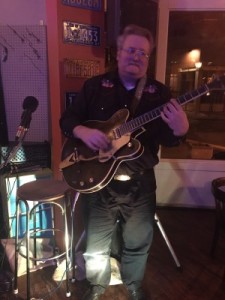 There are few things more rewarding than finding a hip local place with good food, good beer, and good music after a long week.  That was just what was on the agenda last Friday night.

We found ourselves ducking into Stacked STL, a gourmet burger joint in the Patch, and while I was anticipating the burgers that everyone was raving about on Yelp — which certainly didn’t disappoint — I found something even more rewarding.

As we entered the corner eatery, we were immediately greeted by the familiar tune of “Piano Man.” This night was off to a great start. Positioned in front of their large windows was a single man, thoroughly engrossed in his music. Song after song were classics from the last 50 years, the kind that everyone likes to sing along to, and we all were. When he played my favorite, “Brown Eyed Girl,” I knew I had to meet this guy! 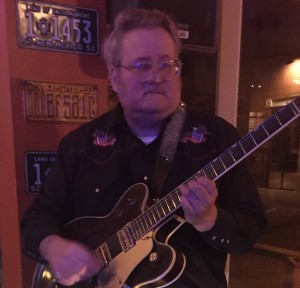 Between songs I stepped up and introduced myself and told him how much we were enjoying his entertainment.  I asked if we could have a chance to get to know him.  He agreed, “after 2 more songs.”

After 2 more songs, my dining companion and I were having a beer with Erik Brooks, a self-professed “Human Jukebox.” Questions weren’t really necessary as he was eager to share his story of how he came to make music his livelihood.

An STL native, Erik grew up in North County.  He told us that his mom was a musician playing a modest 9 instruments and dad was “a drinker, so there were always stray musicians around the house.”  His first instrument was trumpet which he started playing at age 7. He didn’t start playing guitar until, as he says, “a kid down the street was selling a guitar and I talked my dad into buying it for me.”  That guitar was a 1975 Gretsch, Chet Atkins model, the same one he plays today.

He told us that in his 20s he was an insurance agent and woke up every day hating his life and dreading going to work. That’s when he decided that he just wanted to do what he loved, make music.  After a divorce, he quit his job and moved into the city, in a one bedroom apartment across from a pub which he still calls home. The bedroom is his music room, and the living room is where he sleeps. For the last 20+ years he has made his living playing gigs around the city. Brooks, is mostly a solo act, but you can sometimes find him playing bass and singing the high vocals with “Gary & the Dynamics”  in Ste. Genevieve. 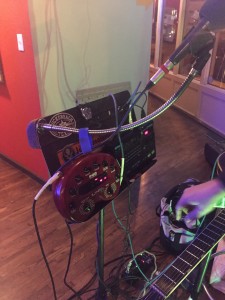 Erik’s weeks range from his 2 standard gigs up to 5 or more with add-ons at places like the Eureka Senior Center. He’ll play as much as he’s offered, happy to load his gear in his Lincoln Town Car, bar stool and all.  Over the years he’s had to get creative with his equipment, and was eager to tell me the story of the converted music stand, stolen from a college in Edwardsville back in the ’60s and given to him by a friend.  This music stand now houses his mixer, pedals, and even the microphone.

Erik is a cover artist playing hundreds of songs from classic oldies, country, folk, standards, and rockabilly. When asked if he ever wrote his own music he told us that sometimes he has an idea that he thinks is pretty good, but believes that people would much rather sing along to the songs they know. Classic artists like Billy Joel, Janice Joplin, Beatles and Elvis are a small sampling of his repertoire and when asked his favorite song to play, he matter-of-factly stated, “Pretty Woman. Every time I play it she comes back to him.”

Erik exudes his passion for his music and I found my cheeks sore from smiling at his stories.

“It’s not for everyone, being a musician, but if you don’t mind driving a 20-year old car and sleeping on a futon, it’s pretty great!”

You can find Erik at Stacked on Friday nights and at Hammerstone’s on Sundays–a gig that he says “Blind Willie” got him 15 years ago. You can also check him out on You Tube!