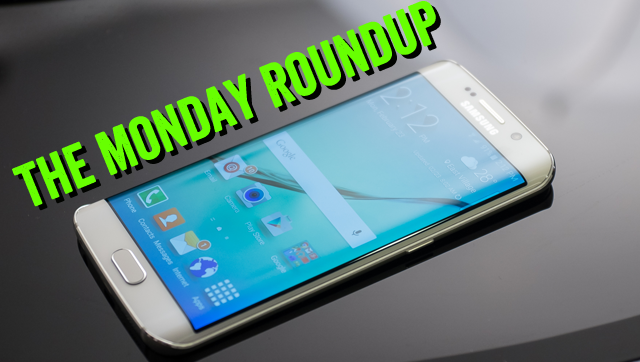 Samsung unveiled two new phones over the weekend, the Samsung Galaxy S6 and the Galaxy S6 Edge. Both smartphones will hit stores on April 10. The Verge calls both phones the “most visually stunning devices Samsung has ever produced”.. The Edge will be priced a bit higher than the regular S6, but Samsung did not announce the price points at the unveiling. According to The Verge, the four major US carriers as well as US Cellular will carry both phones while smaller carriers will only carry the Samsung Galaxy S6. Neither phone features any plastic, which gives both a high-quality look and feel. The Edge features curved glass on the front and back of the phone to make it a bit sexier. Both phones will feature 3 GB of RAM, 128GB of internal storage and a 16-megapixel camera. Instead of a swipe to unlock the phones, a fingerprint sensor is utilized. The camera also features an infrared heart-rate monitor that is supposed to give the use a more accurate white balance. The USB charging system and the speaker are both said to be 1 1/2 times better than the Samsung S5’s. In somewhat of an “Apple move” the new phones have done away with MicroSD slots and the batteries are built into the phones rather than being removable. Forbes has another look at the difference between the Samsung Galaxy S6 and the Galaxy S6 Edge.

Man Tapes Mentos To Self And Takes Coke Zero Bath

This video is actually from back in January but is making its way around the internet today. A Youtber in Japan taped Mentos candies to himself and “jumped” into a bathtub filled with Coke Zero soda. The funniest part may be that this bathtub he “jumped” into appears to be the size of a decent size cooler and while he jumped into a lot of Coke Zero in the tub, there are also a whole bunch of bottles in the tub, one of which he takes a swig from as the Mentos candies and soda fizzes. The video isn’t nearly as cool as this Vine ok a man in a Mentos suit being dunked into a tank of Coke.

Will Smith and Margot Robbie took the weekend box office with their con artist film, Focus. I wasn’t a fan but I contributed to its $19.1 million opening. Kingsman: The Secret Service and The SpongeBob Movie: Sponge Out of Water rounded out the top three with $11.75 and $11.2 million, respectively. Fifty Shades of Grey continued its fall with $10.9 million in its third weekend of release. The Lazarus Effect barely cracked the $10 million mark in its debut weekend to finish fifth for the weekend.

I’ll have more on the weekend box office numbers as well as previews of Chappie, The Second Best Exotic Marigold Hotel and Unfinished Business on Thursday in my Weekend Movie Guide.

The St. Louis Blues lost to the Vancouver Canucks last night in a shootout in Vancouver. The Blues went down 5-2 six minutes into the third period when Nick Bonino scored for Vancouver. Dimitrij Jaskin scored for St. Louis two minutes later in what would be the start of a three-goal comeback to tie the game. Vancouver outscored the Blues 3-1 in the shootout to get the 6-5 win.

The most controversial moment of the game happened in the second period when the Canucks were awarded this Jannik Hansen goal. Hansen takes the shot that is initially saved by Jake Allen and the referee blows the whistle. The puck then falls behind Allen and rolls into the net off his leg pad.

Today’s NHL trade deadline saw the St. Louis Blues make two trades thus far to add grit to their defense. Their first trade of the day brings Zbynek Michalek to St. Louis from Arizona. The Blues sent prospect Maxim Letunov and a conditional 2015 third-round draft pick in return. Michalek is currently out with a concussion but the team is apparently hopeful he will return soon. He is in the last year of a five-year $20 million deal and will be an unrestricted free agent at the end of the season. He has 130 blocks in 53 games this season, good enough for 12th in the NHL. Maxim Letunov is a 19-year-old Russian center, currently playing for the Youngstown Phantoms in the United States High School. He’s currently second on the team with 22 goals and 31 assists in 47 games.

In their second deal of the day, the Blues traded Ian Cole to the Pittsburgh Penguins in exchange for Robert Bortuzzo and a 206 7th-round draft pick. Bortuzzo is a 25-year-old defenseman that stand 6-foot-4 and weighs 214 pounds. The hard-nosed player served a two-game suspension earlier this season for a hit on Jaromir Jagr.

In their third deal of the day, the Blues acquired Olli Jokinen for a conditional 2016 draft pick. Jokinen is a 36-year-old center who was drafted third overall in the 1997 NHL entry draft. He’s played 1,223 regular season NHL games for nine NHL teams. Jokinen was traded in mid-February to Toronto from Nashville. The Leafs general manager told him at the time of the trade that he was hoping to turn around and trade him to a Stanley Cup contender. Jokinen told Chris Johnston of Sportsnet recently how much he wanted to play for a contender again.

Old Crow Medicine Show, the original and best musicians to perfrom “Wagon Wheel” have released the video for their new single, “Brushy Mountain Conjugal Trailer”. The video was filmed inside the now-vacant Tennessee State Prison, which is used as the set for what is supposed to be the famous Brushy Mountain State Penitentiary.

Bill Gates is back at the top for the Forbes list of the World’s Billionaires. That would be the list of the people in the world that possess bank accounts larger than any of us can fathom. Gates tops the list with $79.2 billion. Carlos Slim Helu comes in second this year with $77.1 billion and Warren Buffett rounds out the top three with $72.7 billion. Other billionaires to note are Charles and David Kock, the infamous Koch Brothers tying for sixth place with $42.9 billion each. Christy Walton is the richest woman with $41.7 billion in her coffers. While people like Jim and Christy Walton inherited much of their wealth, Forbes says 69% of The Forbes 400 are self-made. Evan Spiegel and Bobby Murphy of Snapchat come in as the youngest billionaires at 24 and 25, respectively. Speigel and Murphy, Kappa Sigma brothers from Stanford, are both estimated by Forbes to own 15 percent of Snapchat each, which makes them billionaires on paper for now. The oldest person on the list is 99-year-old David Rockefeller, Sr. with a net worth of $3 billion. Rockefeller inherited most of his money as he is the only living grandchild of John D. Rockefeller. He is also the former CEO of Chase National Bank. Michael Jordan is new to the list this year with an estimated net worth of $1 billion. Jack Taylor of Enterprise Holdings is the richest St. Louisan. He ranks 92nd in the world with a net worth of $12.5 billion. Stan Kroenke clocks in at an estimated $6.3 billion while his wife, Ann Walton Kroenke, is worth an estimated $5.5 billion herself.

The group of bat-shit crazy SOBs known as ISIS has threatened to kill Jack Dorsey and other employees of Twitter. They are mad because Twitter keeps blocking their Twitter accounts from spewing their hate speech. Take a second to think about that here. ISIS is mad because the “founder” of Twitter won’t let them spew their hate speech and encourage beheadings on his service.

A Sharknado will hit Washington, D.C. in July of this year. Sharknado 3 will premiere on Syfy sometime in July and cast details are starting to role out. In the biggest news, The Hollywood Reporter reports Mark Cuban will play the President of the United States and Ann Coulter will portray his Vice President. Bo Derek, Jerry Springer, Chris Kirkpatrick and Chris Jericho are among those scheduled to join franchise stars Tara Reid and Ian Ziering. There are also reports that people associated with the movie are sending out emails trying to get notable political figures like Colin Poweel, Oliver North and current Senators and Congressmen to appear in the film.

The Kevin Hart and Will Ferrell comedy hits theaters on March 27. Here’s the red-band trailer for Get Hard.

Get Hard trailer
Brought to you by Mills Properties