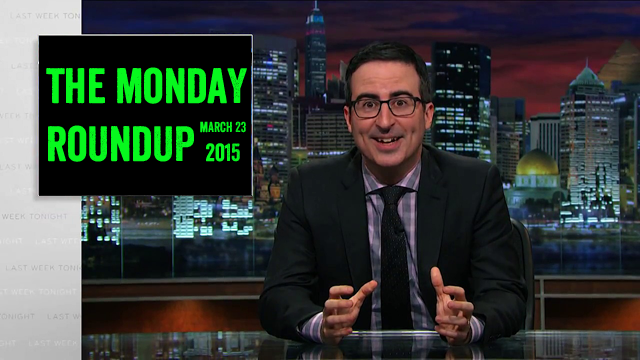 This week’s target on Last Week Tonight with John Oliver was municipal violations. This issue has been in the news here locally in regards to Ferguson, but is an issue nationwide.

The field that started with 68 teams last week is now down to the Sweet Sixteen. 3 of the four #1 seeds are still alive in Duke, Kentucky and Wisconsin. UCLA brings its #11 seed to the round as the lowest seed. The Bruins barely made it into the tournament but upset SMU in the second round then beat UAB, which had upset Iowa State in their first game.

The Sweet Sixteen games will be held this Thursday and Friday. Kentucky will play West Virginia and Notre Dame will play Wichita State in Cleveland, Ohio. North Carolina State will play Louisville and Oklahoma will play Michigan State in Syracuse, New York. Wisconsin will play North Carolina and Xavier will play Arizona in Los Angeles, California. Duke will play Utah and UCLA will play Gonzaga in Houston, Texas. The winners of those games will play this Saturday and Sunday for a trip to the Final Four in Indianapolis, Indiana next weekend. The semifinals will take place on Saturday, April 4 and the championship game will be played on Monday, April 6.

Internet domains .porn and .sucks are among those that will be available to the public beginning June 1. There is a mandated period before the domains become available to the general public where those holding trademarks are able to get their names registered at those domains to avoid those seeking to disparage them from getting ahold of them. Taylor Swift is among those that have taken advantage of this. Taylor Swift has registered TaylorSwift.porn and TaylorSwift.adult and will hopefully troll everybody and just post of a picture of her showing off her belly button. Here’s why a landing page showcasing Taylor Swift’s belly button would be hilarious in case you don’t know.

On a side note, why is the .sucks domain becoming available? The entire point of that is either to let people disparage others or blackmail companies into spending money to keep others from knocking them.

Breaking Benjamin released its first new music since 2009 today with “Failure”. The band has a new set of cast members and will release Dark Before Dawn on June 23.

The Academy of Country Music will release the 2-disc NOW That’s What I Call ACM Awards 50 Years on March 31. The track list includes songs from previous ACM winners dating back to 1965. Among the list are classics like “Okie From Muskogee” by Merle Haggard and “”Behind Closed doors” by Charlie Rich, duets like “Islands in the Stream” by Dolly Parton and Kenny Rogers and 90s classics like “Better Man” by Clint Black and “Chattahoochee” by Alan Jackson. Newer fare from folks like Jason Aldeam, Carrie Underwood and Kenny Chesney is also included on the album. The Boot has the full track list for NOW That’s What I Call ACM Awards 50 Years.

The original NOW That’s What I Call Music! album series is on edition 53 in the United States now and edition 88 in the United Kingdom, which is a little hard to believe. The series that now features Lips Are Movin’ by Meghan Trainor here got its start in 1998 with an album featuring Janet Jackson, Backstreet Boys and Spice Girls among others. It also featured “Flagpole Sitta” by Harvey Danger, which has a St. Louis connection. Evan Sult played drums for Harvey Danger in the “Flagpole Sitta” days and is now living in St. Louis and is one-half of acclaimed local band Sleepy Kitty.

The Divergent Series: Insurgent opened with $54 million over the weekend to easily take the weekend box office. Cinderella took the second spot with an estimated $34.5 million, a 49.2 percent drop. The live-action retelling of the classic fairy tale now sits at $122 million domestically and $253 million worldwide. Run All Night finished out the top three with an estimated $5.1 million in its second weekend.

Sean Penn’s attempt to be the next Liam Nesson, The Gunman, fell below estimates in its opening weekend with a weekend take of just over $5 million.

We’ll have more on the weekend box office numbers as well as early looks at Get Hard and Home on Thursday in our Weekend Movie Guide.

With a tweet yesterday, Texas Senator Ted Cruz announced that he will run for President of the United States in 2016. Some have questioned if Cruz can legally run for President considering he was born in Canadn in Delaware and a while his Cuban-born father was working for an oil company. He more than likely is eligible to run considering his mother was born in Delaware. The United States Constitution doesn’t spell out what “natural-born citizen” exactly means, but it’s generally considered to be someone who upon birth gained his or her citizenship.

I’m running for President and I hope to earn your support! pic.twitter.com/0UTqaIoytP