The Hollywood Reporter wrote in January that movie theater attendance in 2014 was the lowest its been since 1995. The rise of the at-home and streaming movie experiences have led many people to stay away from pricey movie tickets and pricier concessions. In 2013, the average movie theater ticket price rose above the $8 mark for the first time. When the official figures are calculated for 2014, it’s estimated the year’s average ticket price will be about $8.15. Movie theaters are trying all sorts of gimmicks to entice folks to head out to the theater.

Personally, I love the movie theater experience and find it very relaxing. I like seeing the audience’s reaction to a movie. I like cushy seats and I like that for those two hours I’m not distracted by my smartphone. Yes, the smartphone addiction thing is a personal problem that I should be able to avoid at home, but it’s not that easy for me. In a theater I know that me pulling out my phone and lighting up the screen might negatively affect someone else’s experience. I don’t want to be “that guy”. 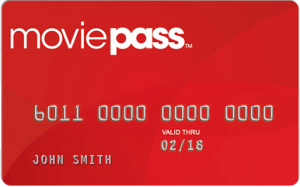 With that being said, the per-ticket price is something that would normally keep me away from theaters. However, in the last 2 months I have seen 19 movies in theaters. At the average price of $8.15 a ticket that’s $154.85 on tickets. I actually only spent about $45 in total. How’d I do that? I subscribed to MoviePass. For $30 per month (Edit: requires a 1 year commitment for the first year) I can see one movie every 24 hours in a movie theater. Just about every movie theater around St. Louis accepts MoviePass. From where I sit as I write this, the MoviePass app on my phone gives me 20 theaters within about a 20 mile radius that I could go see a movie at today.

Stacy Spikes and Hamet Watt founded MoviePass back in 2011 and the company is currently headquartered in New York City. Watt is also a Venture partner at Upfront Ventures among other things. Spikes currently serves as the CEO of MoviePass and formerly was Vice President of Marketing at Motown Records, Sony Music and Miramax Films. In a recent funding round, MoviePass raised $2.2 million. Some of the investors that have put money into the company are True Ventures, AOL Ventures, NaLa Pictures and Lambert Media.

How the service works is you sign up at MoviePass.com and they mail you a customized Discover card that you should receive in 5-7 business days. Download the MoviePass app on your phone and put in your account information. Using the app, find a movie and showtime you want to see. The app uses your phone’s GPS to show you the participating movie theaters around you. Pick your movie and showtime and “check-in”. The system will then activate your MoviePass Discover card and you pay for your movie ticket just like you would with any other card. You can see a movie every 24 hours and can only see a movie once using your card.

In most markets MoviePass only works to purchase tickets to standard 2D showings of movies. The company is currently offering premium plans in Boston and Denver in partnership with AMC Theaters. For $45 in Boston or $40 in Denver, users can also watch IMAX or 3D showings of films.

Spikes recently participated in a “Ask Me Anything” (AMA) session on Reddit where he said that MoviePass is currently accepted in 90% of theaters nationwide. The only theater chain in the St. Louis area that I have found that doesn’t accept MoviePass is St. Louis Cinemas. MX Movies in downtown St. Louis on Washington Avenue accepts MoviePass.

My favorite theater that I’ve used my pass at is the AMC Esquire 7 on Clayton Road. With seven movies almost always on the bill, it allows plenty of options. The theater reopened in October of last year after a multi-million dollar renovation and features large, plush recliners in each theater.

I mentioned earlier that I’ve only spent $45 on my two months of movies. That’s because MoviePass is currently offering a two-week free trial. Watch as many movies as you want in that two weeks and if you don’t think you’ll get your money’s worth in a month, cancel and owe nothing.