I confess, I dig a good donut. And for those of you who are spelling and grammar fanatics, you can spell it donut or doughnut; either are acceptable in the English language! 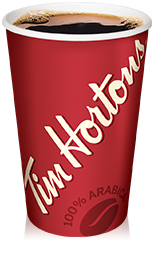 On my daily commute to work, I am now greeted by a sign for a new addition to our St. Louis donut landscape – Tim Hortons Cafe & Bake Shop. Yes folks, if you haven’t heard, the Canadian donut juggernaut is moving into the Midwest! Long a contender on the east coast, Tim’s is building it’s first St. Louis location in Maplewood, at Manchester and Big Bend, next to the new CVS Pharmacy. I can report that there is mud being slung about and progress being made on construction. But speaking of mud, what is Tim’s really famous for besides donuts? Tim’s, I am told, pours a great cup of java! You will hear die hard Tim’s fans sigh with satisfaction when discussing their morning double-double (double cream, double sugar) and favorite donut.

Tim Hortons has some great competition in St. Louis in the area of donuts, both chain, new ownership, and long time bastions of tasty fried dough. What are the other options out there in STL to get your donut on? Let’s talk chains first:

We also have some amazing donut locations that have become institutions in St. Louis and award winners on a national scale. Let’s give a few kudos to those amazing purveyors:

An amazing, old school donut shop that is as authentic as it gets. Named last year by USA Today as one of the “Top 10 Donut Shops in the US in 2014.” The wonderful owners have been getting up at 1:30am every morning since 1976 to make some amazing donuts, apple fritters, and hand pies. Yes, hand pies, as in fruit pies that will fit in your hand! Very tasty! Forget your debit card or credit card because they are serious when it comes to their cash only policy! Even Alton Brown of the Food Network agrees that a blueberry cake donut is a great way to start the day there!

As new school as World’s Fair is old school, Strange Donuts thrives on finding new flavor combinations inspired by some of their favorite local restaurants and iconic legends such as Elvis Presley. If maple bacon or lemon poppy seed sound tasty to you, this is a great place to stop, but stop early because when they are out, they are closed. Dones rule! 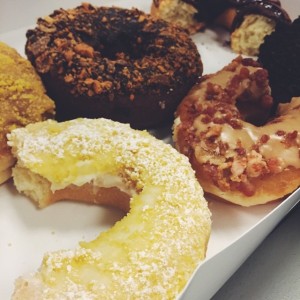 If you are a North County dweller, you have surely heard of Old Town and probably been there more times than you can count. If you want to see your neighbors, find the mayor or an alderman to discuss getting a stop sign put in on your block, or see someone you went to high school with, just hang out here! They do a great little maple bacon long john, but it’s all good here!  The original location in Florissant is open 24/7 for whenever you get the hankerin’, and the second location in Cottleville at 3941 Mid Rivers Drive is open 5 am – 9 pm.   Want to treat your friends? Get some gift certificates called Donut Dollars!

With my current work location, this one takes the cake…cake donut that is. They also do a lovely, light and airy glazed donut that will have you satiated and sugar buzzing! Their glaze is just right, not too sweet, and makes you happy someone invented a donut. Hours vary, but opens at 5 am each day.

You West County folks have something to cheer about as well. The Donut Palace is a family owned business for the last 20 years and these people know how to make them! Give their cinnamon rolls a try and their cookies too. Open at 3:15am!

These are but a few of the great donut creators we have in STL that I can personally vouch for their tastiness. Who can you add to the list? I’m sure there are more! Put your taste buds on the line here and give us your recommendations.

Still buzzing from all that sugar…