Miss Colombia, Paulina Vega, was crowned Miss Universe 2015 last night in Miami. Miss USA, Nia Sanchez, finished as the first runner-up. No representative from an African nation made the Top 15, which was basically the portion that was televised. Miss Nigeria was named Miss Congeniality and appeared just briefly on screen. Manny Pacquiao was one of the event’s judges for some reason and he asked Miss USA what message she would send to terrorists given the chance.

One portion of the pageant called for contestants to wear a “National Costume”. Miss Canada, Chanel Beckenlehner, clearly won this event. 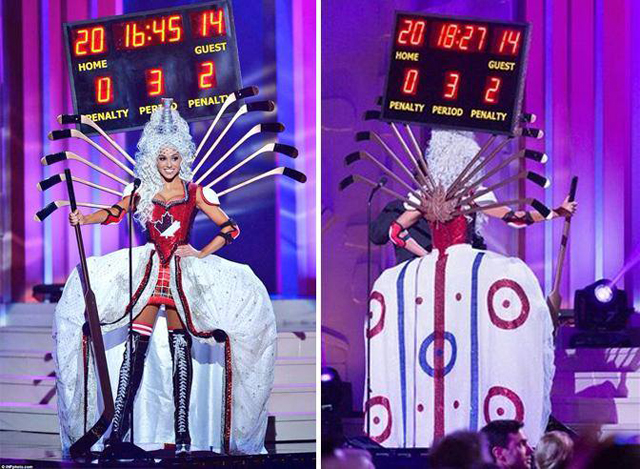 The cast of Birdman took home the award for Best Performance By A Cast In A Motion Picture at the 2015 SAG Awards. Viola Davis took home an award for her role in How To Get Away With Murder. One big story was Zach Galifianakis, who showed up without his familiar beard and apparently lost a few pounds on the way to the show.

Blake Shelton hosted Saturday Night Live over the weekend. Shelton told People Magazine that his favorite part of the show was getting to perform with his band.

American Sniper again surpassed expectations at the weekend box office with $64 million in receipts in its second weekend of release. Jennifer Lopez’s The Boy Next Door took second place with an estimated $15 million opening weekend. Paddington came in third with $12.4 million.

Paddington has brought in $40 million domestically, but that only accounts for less than 25 percent of its worldwide take thus far of almost $170 million. The film has been a huge success for Studiocanal, which bet big on Paddington and its estimated $55 million budget. Mortdecai, by contrast, had a budget of $60 million and flopped fairly miserably in its opening weekend with $4.1 million.

We’ll have more of the box office numbers on Thursday in our Weekend Movie Guide. We’ll also preview Black or White with Kevin Costner, Project Almanac and The Loft.

People living in the Northeast part of the United States are being told to brace for what may be the biggest storm to hit the area in quite some time. Latest reports call for up to three feet of snow and winds close to hurricane-force. Airlines have already canceled almost 6,000 flights due to the storm.

Emma Watson announced today on her Facebook page that she has been cast to play Belle in live-action Beauty and the Beast project that Disney is working on. The new film will begin filming later this year. The animated Beauty and the Beast was released in 1991 and is one of the only animated films to get an Oscar nomination for Best Picture.

Several outlets are reporting on rumors that the St. Louis Rams are interested in trading for Nick Foles of the Philadelphia Eagles. Eagles’ coach Chip Kelly is determined to get Marcus Mariota in the 2015 NFL draft, according to reports. That would mean that Foles will likely be traded to make room. The 26-year-old Foles has started 24 games in has NFL career and the Eagles have a 15-9 record in games he has started. In those games, Foles has completed 61.6 percent of his passes for 6,753 yards and 46 touchdowns while throwing 17 interceptions. It’s being said that Foles is being looked at by several teams. There are still questions in St. Louis about whether Sam Bradford is “the guy” at quarterback, especially considering he has missed the last 25 games due to injuries. When relatively healthy, Bradford has started 49 games in his career and completed 58.6 percent of his passed for 11,065 yards and 59 touchdowns while throwing 38 interceptions.

Nick Foles is in the last year of his 4-year rookie contact and is scheduled to make $660,000 this season. Sam Bradford is scheduled to make just shy of $13 million this season. He signed his rookie contract as the #1 overall pick in 2010 right before the new collective bargaining agreement came into play. Bradford would count as $16.6 million towards the Rams’ salary cap this season. Coach Jeff Fisher wants to have Bradford in camp to compete for the starting job, but he would need to renegotiate his deal for it to make sense for the Rams.

BMW will run this commercial, “Newfangled Idea”, during Super Bowl XLIX this Sunday. The ad starts with a clip of Katie Couric and Bryant Gumbel from 1994 and flashes forward to them riding in a new BMW i3.

Full House creator Jeff Franklin celebrated his birthday this weekend and the show’s cast was in attendance. Candace Cameron Bure, Bob Saget and Lori Loughlin were among those that posted pictures from the event.