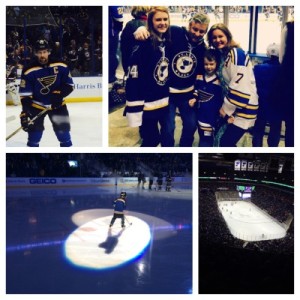 To start off let me just say that I have been a Blues hockey fan since before I was born! My entire family has been to too many games to even count over the years. My brothers and sisters have fond memories of going to the old Arena with dad and cheering on their Blues. I will never forget talking in great length with my father on every player from Garry Unger and Bernie Ferderko to Hull and Oates. My brothers dreamed of wearing the Blue Note and my sisters knew just as much as my brothers did about the game. We have a proud history of loving our team. But what happened to my son and our family this past weekend pretty much sealed the deal for me and the St. Louis Blues.

My dad passed away a day before he was to go to his first game in what he called the “New Arena” (Scottrade Center). He was so excited and talked all evening about how he and my brother were going and what fun they would have. His sudden passing left a hole in all of our hearts. We told my brother he needed to go to that game for dad. He did and I believe dad made it there too that night. Every time I enter Scottrade, I feel a sense that my dad is right there with me. I also believe my dad orchestrated my meeting the biggest Blues fan ever; my husband. When we met, my husband had season tickets and asked me on a date to one of the games. Little did I know that twelve years later I would still be sitting next to the guy who some may call the loudest Blues fan; the Horn Guy. My husband has been a devout Blues fan and we do believe he bleeds blue. He has always loved blowing the horn at the games and helps the entire crowd chant “Let’s Go Blues.” After we started our lives together, purchased a home, got married, and raised children, the season tickets became something my husband had to re-prioritize, but every chance we get we make it to games.

My husband made sure his love of the Blues was passed on to our children. My daughter yells at the TV screen like a man whenever there is a bad call and one of my son’s first words was “hockey”. When my son grows up he wants to be a Blues Hockey player and a firefighter on the weekends! My son’s love of the game of hockey and the St. Louis Blues is just as immeasurable as the rest of us, which makes what he had the opportunity to do this past weekend the prime reason the St. Louis Blues will forever be in the hearts of my family.

My husband informed me two weeks ago that our son had been picked to be the BMO Harris Bank Kids Captain. This would entitle our son to a signed jersey by St. Louis Blues captain David Backes (one of my son’s favorites), 2 tickets to the game, a swag bag of fun St. Louis Blues and BMO Harris Bank goodies, and finally, the opportunity to skate out with the team and stand next to them during the National Anthem. When telling my son what he had won, the little man couldn’t stop hollering in sheer joy. The night of the game we went out to eat and he was as vocal as his father was, telling the waiter that we needed to hurry the meal along because we needed to get to the game early! On behalf of my family, I would like to thank the awesome staff at Joe’s Crab Shack for their understanding! 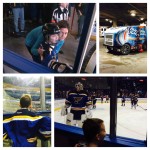 We entered into the bottom halls of the Scottrade, a place I had never been, to wait for our awesome guide for the evening, Amy. I looked up from my seat and noticed the great Bob Plager was walking towards my family. My husband immediately got up and shook his hand and ushered our son to do the same. “You want shake this man’s hand; he is a great,” explained my husband to my son. That’s when it hit me how great a night this was going to be. We proceeded to walk through the lower halls past the Zamboni and out into the lower area to watch the pre-game skate. After a few good photo ops we had to get the boy in his gear. He donned his St. Louis Blues sweater signed by David Backes and laced up. Amy told the family to stand behind the glass as she took the little man to stand in his spot to wait. They proceeded to roll out the St. Louis Blues rug for him. The lights lowered and they started naming our St. Louis Blues one by one, until they got to David Backes. Then they did it, they announced the BMO Kids Captain for the game, Ethan Bullock! The spotlight was on him as we cheered with the rest of the packed house. He skated out to the line next to Alexander Steen and proceeded to look up and salute his flag with his team as they sang our National Anthem. 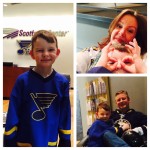 What a feeling of such joy, fear, pride, and excitement all at once…and that was just what I was feeling! I can only imagine what was going through my little guy’s mind. This was an experience we would never forget. After it was over and we were sitting in our seats enjoying an awesome game, I couldn’t help but look up and thank the guy that was in the building in spirit for sure that night for what he most likely had a hand in.

You see, the St. Louis Blues aren’t just another hockey team; they are Our Team. If you have never been to a Blues hockey game, you need to go. From the atmosphere to the players and the game, it’s never a dull moment! And if you happen to hear a very loud horn blasting from the top row of the building, it just might be the Bullocks cheering on Our Team.

This Weekend in St. Louis Ryan 799 days ago.

This Weekend in St. Louis Ryan 800 days ago.