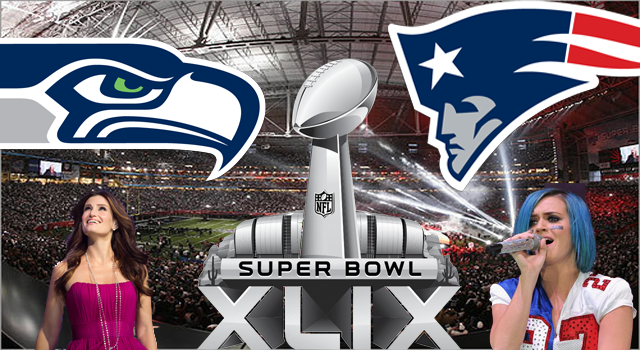 University of Phoenix Stadium in Glendale, Arizona will play host to Super Bowl XLIX. The NFL originally agreed to hold this Super Bowl in Kansas City way back in 2006. That decision was contingent, however, on voters approving a measure that would have funded a retractable roof that could be used over Arrowhead Stadium or the adjacent Kauffman Stadium. That measure was defeated and Kansas City lost out on hosting Super Bowl XLIX.

The Seattle Seahawks, the reigning Super Bowl Champions, return to the NFL’s biggest game to face the New England Patriots.

Idina Menzel, otherwise known as “Adele Dazeem”, will be performing “The Star-Spangled Banner” and John Legend will be singing “America The Beautiful”. Blake Shelton, who performed Legend’s role in 2012 along with his wife, Miranda Lambert, was rumored to have been singing the Anthem. While Idina Menzel is definitely qualified to sing the National Anthem, it’s not a very original choice on the NFL’s part. She sang the Anthem before the 2014 Major League Baseball All-Star Game.

Katy Perry will headline the halftime show at the 2015 Super Bowl. Perry recently announced that Lenny Kravitz will make a guest appearance during her performance. She has been hinting on the internet that she has some pretty crazy things up her sleeve for the performance. Perry also made it known she is available to play the Puppy Bowl next year.

The commercials that big companies debut during the Super Bowl are a highlight for many folks that watch the game even though their team may not be playing. NBC announced earlier this month that 95% of the Super Bowl commercial slots have been sold. The typical asking price is $4.4 -$4.5 million with slight discounts being offered to advertisers that buy multiple ad slots. Anheuser-Busch recently gave some hints of their commercials set to air. One will be a 60-second ad for Budweiser that “highlights the brewing credentials for America’s no. 1 full-flavored lager”. Another commercial will be a sequel of sorts to last year’s hit, “Puppy Love.” The new ad will feature the Budweiser Clydesdales as they “help a puppy who lost his way learn the true meaning of friendship.” A spot for Bud Light will be part of its “Up For Whatever” campaign. The commercial was filmed last weekend in Los Angeles and featured invited guests trying to make their way through a real-life Pac-Man game.

Here is a collection of commercials from Super Bowl XLVIII. The USA Today Ad Meter is where you can vote on the Super Bowl XLIX commercials. Budweiser’s “Puppy Love” was the top-rated commercial during Super Bowl 2014. Doritos came in second with “Cowboy Kid” and another Budweiser commercial, “A Hero’s Welcome”, came in third.

Doritos is again running their “Crash the Super Bowl” contest. The brand will air two commercials submitted as part of the contest. One will be picked by fans and one by the Doritos brand team. The grand prize winner will receive $1 million and a job at Universal Pictures for a year. One finalist, Zach Zabielski, produced his ad on a budget of $2,000 and got approval from his wife to use their son in the spot.