At the beginning of the week I was in a rush to send out my Christmas cards so that my friends and family would receive them before Christmas. In signing them all, I started to wonder about the Christmas Card. Where did it originate from and is it becoming yet another thing of the past? 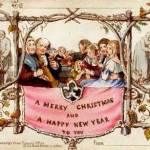 Did you know the sending of commercially printed Christmas cards originated in London in 1843? The first Christmas card designed for sale was by London artist John Calcott Horsley. A respected illustrator of the day, Horsley was commissioned by Sir Henry Cole, a wealthy British businessman, who wanted a card he could proudly send to friends and professional acquaintances to wish them a “Merry Christmas.” The first Christmas card’s inscription read: “Merry Christmas and a Happy New Year to You.” “Merry” was then a spiritual word meaning “blessed,” as in “merry old England.” Printed cards soon became the rage in England, then Germany. But it wasn’t until thirty years later that Americans took to the idea. In 1875, Boston lithographer Louis Prang, a native of Germany, began publishing cards, and earned the title “father of the American Christmas card.” Today more than two billion Christmas cards are exchanged annually, just within the United States. Christmas is the number one card-selling holiday of the year. 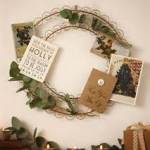 It may be a result of social media. Don’t get me wrong, I love social media. I have connected with and reconnected with so many family members and friends because of it. I think that some people have the opinion that wishing everyone a Merry Christmas and a Happy New Year on Facebook or Twitter counts as a Holiday Greeting. This may be true, but in my opinion there is nothing like getting that Christmas card from Aunt Dee sending me warm wishes for the holiday season. I enjoy sending my Christmas Cards out to my loved ones to let them know how much I care for them as well. I believe that in this fast paced “hurry up and get it all done quickly” world, it’s easy just to copy and paste that cute saying on your wall and move on to the next thing. There is just something to be said about the art of putting pen to paper, sticking that stamp on the envelope, and letting the post office personally deliver a holiday greeting from me and my family during the holiday season. 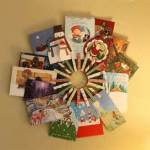 Does that make me a Hallmark sucker? Probably, but it’s okay; it’s the Christmas Season.

What are your thoughts? Do you send out Christmas Cards like me? Do you think that the sending of Christmas cards is soon to be a thing of the past? Are you Team Christmas Card or Team Facebook Christmas Wishes?

To read more about the history of the first Christmas card in America, go to nyhistory.org.

This Weekend in St. Louis Ryan 975 days ago.

This Weekend in St. Louis Ryan 976 days ago.