2011: “St. Louis Doesn’t Suck” article written by Aaron Perlut hits the news and the streets of St. Louis, resulting in hundreds of thousands of views. A wake-up call if you will, sparking conversation about how to change the negative perception of St. Louis.

2012: Rally St. Louis campaign kicks off. A platform that will enable St. Louis to change the perception by offering 1. a place to share ideas for positive changes in St. Louis and 2. funding from the region’s residents and businesses to put those changes into motion. Once those ideas become a reality, they can be used as a way to positively promote St. Louis. 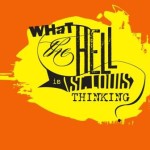 2013: What the Hell is St. Louis Thinking (#WTHSTL) is all over the social media channels. What is this? How can I join? Those who are not involved are not exactly sure WTH it is, but we can tell it’s going to be big.

Details on the original project and how it got to this point:

1. What The Hell STL is pretty much the coolest name for a project one can come up with. 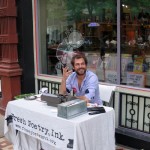 2. It was created by Henry Golkamp, a rogue poet…hold up, I didn’t even know that existed!…and creator of Fresh Poetry, Ink, which while I’ve never seen out and about, is one of the coolest things I’ve read about in St. Louis. Forget tourist attractions like The Arch and Science Center. Is it not way cooler to come back from vacation with a one-of-a-kind poem from a St. Louis street poet that you passed by on your way to lunch?? Read what he does here. It’s examples like this or STL Improv giving away hand-made Valentine’s cards to strangers throughout the streets of STL that make St. Louis special.

3. It won the Sloup #36 project idea to help gain funding. Don’t know what Sloup is? Check it out here. And follow them on Facebook to find out when and where the next Sloup meeting will take place.

4. The idea is to place typewriters all over St. Louis, let St. Louisans go to town typing poems, complaints, loves, hates, drunken rants, or whatever it is they’re thinking. Then everything collected from the project will be compiled and edited into a book of the same name to answer the question: What the hell is Saint Louis thinking? There are roughly 40 locations throughout STL equipped with paper, a typewriter, and a drop box for the final products. 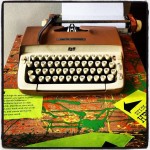 6. You need to find your inner creativity, then find one of these typewriters and get your 2-cents documented, because my guess is this is going to be big and you’ll want to look back and say you were a part of it.

7. The project asked for volunteers to take a typewriter home for 1 or 2 days, share their thoughts, and then pass it on to friends and family to do the same, in hopes to get a more diverse collection.

What the Hell is St. Louis Thinking officially began as an idea in August 2013 and gained enough attention and support to raise more than $7,000 to publish the book through a Kickstarter campaign. You can follow the project on Facebook and Twitter and pre-order the book on Bottlecap Press, the publishing company. Or wait for it to come out and pick up your copy in one of these places: Star Clipper, Subterranean Books in the Delmar Loop, 10denza, Left Bank Books in the Central West End, and STL Style on Cherokee (I’m sure there will be more to come).