24 states have state lotteries that benefit education. In 21 of those states, education spending is down or flat. I don’t think that’s more a knock against legislators who think “oh the lottery is funding education, we can spend our money elsewhere”.

The St. Louis Rams were leading the 7-1 Arizona Cardinals 14-10 with about four minutes left in the third quarter when quarterback Austin Davis hit Jared Cook for a 41-yard pass that had the Rams inside the Arizona five-yard line. Officials called an Illegal Blindside Block penalty on Lance Kendricks, which brought the ball back to the Arizona 35-yard line. Rams coach Jeff Fisher, who is the co-chair of the NFL Competition Committee, did not think the penalty was deserved. The wheels fell off for the Rams after that. Arizona starting quarterback Carson Palmer went down with a possible ACL tear early in the fourth, but his backup, Drew Stanton, threw a touchdown on just his third pass of the game. Cardinals rookie wide receiver John Brown made an excellent diving catch for the touchdown and the over-shadowed his performance with his celebration dance. Austn Davis then threw interceptions on the next two drives, one of which was returned for a touchdown. On the drive after the Pick-6, Davis was hit while maybe throwing and the ensuing fumble was returned to make it a 31-14 Arizona Cardinals win.

The Rams fall to 3-6 on the season while the Cardinals move to 8-1. The Denver Broncos come to the Edward Jones Dome on Sunday for a noon kickoff. Broncos quarterback Peyton Manning threw for 340 yards and five touchdowns yesterday as Denver beat Oakland 41-17. The Broncos and Manning were dominating the Raiders enough by the third quarter that Broncos backup quarterback Brock Osweiler was upset Manning took the field for a late-quarter drive.

Early estimates show the animated Big Hero 6 taking the weekend box office with $56.2 million to Interstellar‘s $50 million. The box office’s overall gross receipts of $158 million are the most since early August. Gone Girl and Ouija came in third and fourth. Current estimates show Gone Girl with $6.1 million and Ouija with $6.017 million.

Big Hero 6 picked up $23 million overseas over the weekend while Interstellar picked up $80 million.

We’ll have more on the weekend numbers plus previews of Foxcatcher, Dumb and Dumber To and other movies opening this weekend on Thursday in our Weekend Movie Guide.

Kansas City, Kansas is thinking about repealing its 24-year old ban on pit bulls. They are part of a growing trend of people finally realizing that pit bulls and the like are not the problem. Scumbag owners are the problem. 19 states have laws against breed bans and Missouri came close to being number 20 in the last Missouri General Assembly session. The National Canine Research Council reports that 97 municipalities repealed their breed-specific legislation (BSL) between January 2012 and May 2014

There isn’t a specific breed of dog known as a “Pit Bull”. Many of these ancient and ridiculous bans basically classify any dog with a square head and a bulky body as one. Here are some that don’t have scumbag owners.

A Redditor apparently came across Pepsi taste-testing this ridiculous drink at Kent State University. The guy who tried it said it had a flavor of “like if you shoved a handful of Doritos in your mouth and chugged some Dew at the same time”, which sounds awful.

Someone apparently hit PUBLISH a little too soon on the new “Blank Space” music video from Taylor Swift. The apparently “stupendous” video was available online for a few hours earlier today. When it premieres for real, we’ll see a music video that “redefines politics, music and everything else ever”. Joseph Kahn directed the video and says it will actually premiere on Good Morning America tomorrow morning and be available online after.

Here’s T-Swizzle in a rap video to hold you over until the “Blank Space” music video is officially released. UPDATE BELOW

David McCandless created this awesome infographic that was posted to Information Is Beautiful. Among the truths thrown down here? The human tongue does not have different sections for bitter, sour, salty and sweet. The Great Wall of China is not visible from space. Goldfish have a memory span of three months not 3 seconds. Nowhere in the Bible does it say Satan rules hell. Gum actually digests just fine and in normal time.

President Obama Stands Up For The Internet

President Barack Obama is asking the FCC to classify the internet as a public utility. This is a pretty big win for the net neutrality crowd. GIZMODO broke down Obama’s plan into four basic points: No Blocking, No Throttling, Increased Transparency; and No Paid Prioritization.

Republican senators Ted Cruz and John Thune are not fans of President Obama or his plan.

Stage Version of The Hunger Games In The Works

Lionsgate is part of a group that is planning the production. Robin de Levita is one of the producers of the project, which is scheduled to open in 2016 at a new venue next to Wembley Stadium in London.

Reporter Was Not Caught Peeing On Camera

Gawker has a roundup of “viral” photos and stories that were being shared a lot by idiots last week. The reporter that supposedly was caught relieving himself on a live shot last week was actually playing with his phone. Also, original Beanie Babies were not filled with spider eggs that are now hatching. There are so many idiots out there that Gawker has a whole separate blog dedicated to calling them out.

The University of Connecticut women’s soccer team won their conference tournament. For some idiotic/teenage reason freshman Noriana Radwan decided to flip off an ESPN camera. UConn released a statement saying she has been suspended indefinitely. She made a really poor decision, but let’s not go overboard here. Just let one of the seniors on the team slap her upside the head, call her an idiot and let the team play at full strength in the NCAA tournament that they’ve worked all year for. 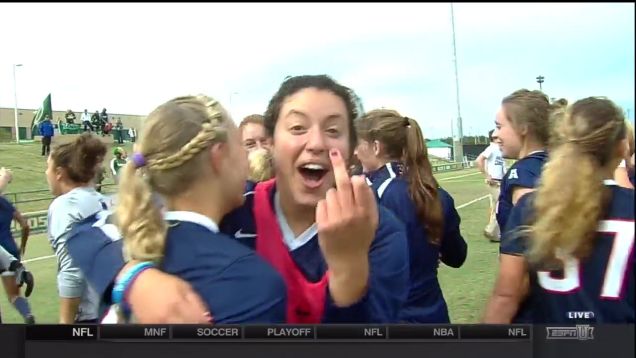 For some reason, this is still up here. Watch this while you can. UPDATE: Taylor Swift does her own thing and has released the video on Youtube and Vevo.

In case the video above gets taken down before you read this post, here’s a great one. Ushers at the Target Center in Minneapolis saw this woman’s sign and brought her up to the front of the stage at a recent Garth Brooks show. Garth saw it and then…well… you will cry if you have a heart. The woman, Teresa Shaw, has been battling breast cancer and was at the show with her daughter. Brooks gave her his guitar and some words of encouragement after the song.