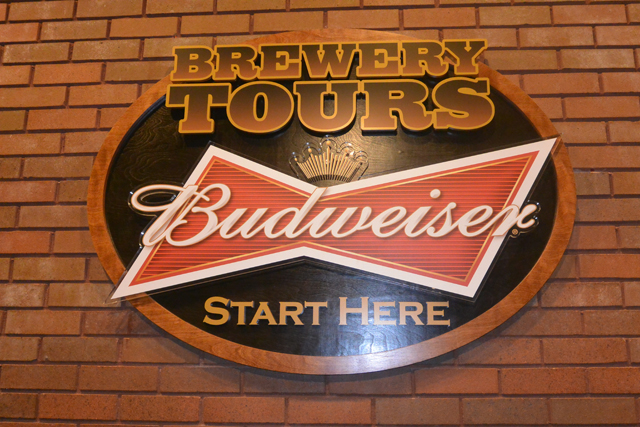 Earlier this week our team was lucky enough to get invited out to tour the Anheuser-Busch Brewery in grand style, and dine like kings in The Biergarten. We toured the historic brewery grounds on the Anheuser-Busch Beermaster Tour and then became some of the first people to sample chef Travis Odle’s brand new menu.

While free tours are offered year-round of the grounds, the Beermaster Tour gives visitors a more behind-the-scenes look at the operation. The upgraded tour lasts about an hour and 45 minutes, whereas the complimentary tour was shortened to 45 minutes back in June.

We met our tour guide, Marc, in the front lobby of the A-B Tour Center. He reiterated to us that we would be going on the more extensive tour so we needed to sign waivers letting A-B off the hook in case we did something stupid. He also made an important point about how the roughly 145-minute tour didn’t include any scheduled restroom breaks. This, of course, led to a brief pause for our outing as mostly everyone went to make sure they would be good for the majority of the tour.

Within the first steps of the Beermaster Tour, you know it will be quite a bit different than the complimentary tour as you step through a door clearly marked “Employees Only.” We were led up to a cozy room on the second floor where we gathered around on comfy leather chairs and couches. Marc offered us beverages from the recently stocked refrigerator, which was packed to the gills with an assortment of AB-Inbev products. He then went into detail about the brewing process. We passed around buckets of different ingredients and we all got to smell and taste each one. Marc directed us not to try the hops under any circumstance because it would end terribly for us.

Mary and Shelley with our group both noted this first part of the tour as a highlight. Mary loved “being able to taste the grains that make the beer, in their different formats” while adding that she was really interested to hear how “their ratio affects the flavor, color, and bitterness of the beer.”

After the talk, we all bundled up for the tour and got our goodies. It’s probably good advice not to schedule your tour on an extremely cold evening. Each person on our tour got a nifty Anheuser-Busch Tours hat to wear during the tour and keep as a souvenir. We were also assigned safety glasses for when we walked through production areas and audio equipment so that we could hear Marc through headphones in noisier areas. Those were about as essential in some areas as our coats were in others.

The tour took us through the historic Brew House, past the Fermentation Cellars and into the Bevo Packaging Facility. All along our path between the buildings, large pipes connected some buildings high overhead. Marc explained that these pipes carried the cold beer through the brewery grounds during the brewing process. One place we did not get to see, however, is the room where the famous Budweiser yeast strain is kept. It is said that the original yeast strain from which Budweiser was first made in 1876 is still in use to brew Budweiser, Bud Light and Budweiser Black Crown. That strain is under an extremely tight watch somewhere on the brewery grounds.

Beer samples are a symbol of each brewery tour. On the Brewmaster Tour, Marc hooked up a gadget to a valve on a finishing tank for us and we got to pour ourselves samples of extremely fresh Budweiser.

Our tour ended at the Clydesdale Stable. The building was originally built back in 1885 as the private stable of Adolphus Busch. One feature that definitely wasn’t on the door back in 1885, was the lock, which happened to be fully locked. The rest of the brewery tour operations had shut down for the day, leaving our group and our fearless leader. Luckily security was able to come open the front doors for us, but they didn’t know where the lights were. It was definitely a unique experience fumbling around in a historic area like that looking for a light switch.

I’ve been on the complimentary tour several times. The Beermaster Tour was a pretty awesome experience and is a pretty great deal at $25. If you’re looking for an experience somewhere in between those two options, go with the Day Fresh Brewery Tour for $10. That tour is slightly longer than the complimentary tour and includes a bottle of beer made that day as well as tastings along the tour.

You are encouraged to take as many pictures as you want on the tour. Here is a photographic sample of our day.

After the tour, we headed over to The Biergarten, a new addition to the Anheuser-Busch compound in Soulard. We were in for quite the treat from chef Travis Odle. We can’t recommend it highly enough, but check out what had us so full.