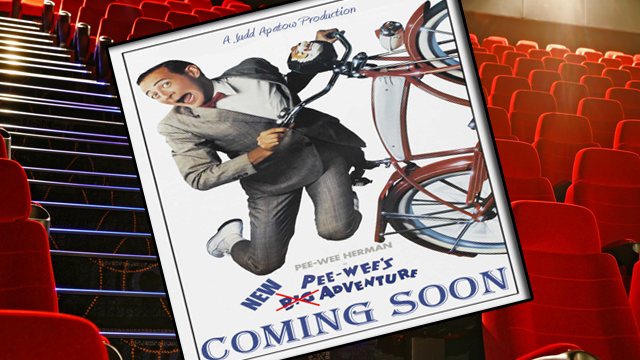 Paul Ruebens, better known as Pee-wee Herman, was on The Tonight Show Starring Jimmy Fallon last night and basically confirmed some HUGE news. A new film starring Pee-wee Herman has long been talked about and anticipated by fans of the original movie, Broadway show and children’s television series. Ruebens told Fallon last night that Judd Apatow will produce the film and a director has already been chosen. The actor expects the official announcement to happen as soon as next week.

Ruebens created Pee-wee Herman in the 1970s after he barely missed the cut at Saturday Night Live and ended up putting the character in a stage show. HBO would air a special called The Pee-wee Herman Show in 1981 that introduced the character to the masses and increased his notoriety exponentially. Pee-Wee’s Big Adventure came out in theaters in 1985 at a cost of $6 million to make and grossed $41 million at the box office during its initial run. In today’s dollars, that would be around $90.5 million.  The movie was the 19th highest-grossing movie of 1985, finishing right between Pale Rider and Brewster’s Millions. A sequel, Big Top Pee-Wee, was released in 1988 to poor reviews and a $15 million take during its theater run. Pee-Wee’s Big Adventure was Tim Burton’s first big win as a director. He credited the success of the film in part for allowing him to make 1989’s Batman.

Ruebens and Pee-wee were brought to the small screen shortly after the first film by CBS. Pee-wee’s Playhouse was a live-action comedy/educational show aimed at children that ran from September 13, 1983 to November 17, 1990. The show’s team included such heavyweights as Laurence Fishburne and Paul Hartman.

Fishburne portrayed Cowboy Curtis on eight episodes of show over the course of its run. Laurence would go on to have a pretty stellar television and film career. The late Hartman played Captain Carl.

The entire run of Pee-wee’s Playhouse was released on Blu-ray earlier this month. An amazing amount of work went into re-releasing the show. The 8-disc set from Shout! Factory can be had on Amazon for $96.99 right now. The crazy Playhouse world can be found at Peewee.com

Ruebens ran into legal trouble after Playhouse’s television run and became a punchline for much of the 90s. He famously poked fun at himself at the 1991 MTV Music Aawards as Pee-wee.

Ruebens’ most  notable role during the decade was that of Andrew J. Lansing on six episodes of Murphy Brown, which he was nominated for an award for. He resurfaced in the 2000s and Ruebens most recently showed up on The Blacklist as Mr. Vargas.

There really isn’t anyone right now other than Judd Apatow you would want producing a new Pee-wee Herman movie. Apatow has produced some of the biggest comedies of the last decade. The 40-Year Old Virgin, Knocked Up and Superbad were all his productions. Anchorman, Forgetting Sarah Marshall and Bridesmaids were also his.

According to Rueben, the new Pee-wee project will begin production in Feburary. Until then, you can follow Ruebens on Twitter and enjoy this awesome sketch he did back in 2011 with Andy Samberg.