Anyone that was old enough to remember will never forget.

I remember coming out of my sleep and thinking, Am I still dreaming, what a crazy dream about a plane hitting the World Trade Center. I quickly realized it wasn’t a dream. I could hear the tension in the news caster’s voice, something which I had never heard. They tried to be calm as they reported that a plane had crashed into one of the towers of the World Trade Center. My mind immediately went to those poor people on that plane and what must have happened. What was wrong with the pilot to fly right into a building? I watched as I proceeded to get ready for work still not completely understanding what was going on and then, it happened again. Another plane hit the other tower. As it happened, I realized, along with the rest of America watching, that this was no accident. At that moment I realized we were being attacked. I walked to work where my team and I watched more footage of another plane hitting the Pentagon and then another plane crashing in Pennsylvania. I, as many others at that moment, thought is this ever going to stop? Are they going to keep doing this? We all stayed close to one another all day until we were told to go home and be with our families. I remember grabbing my daughter from daycare and just holding her all night. I remember crying for those lost. I remember all the different emotions, grief, sadness, anger, hate. But mostly, I remember fear.

Before September 11, 2001, I never felt afraid in my country. This day changed so much about this country in my opinion. We have heightened security measures. There is always a sense of awareness of every kind of terrorist that may be lurking in a certain corner of our own country. Every time I hear about another possible “cell” it triggers those uneasy feelings of fear. I don’t think this country will ever be the same as it was before. 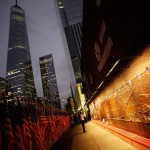 Even with all of the unrest in this country, it is still our country. We as a nation need to understand what it means to be an American. It is still a right and a privilege to be an American. People still come to America to be free and to chase their dreams. We still occupy the greatest country on Earth. We need to start acting like it. People may not agree with my opinion and that is okay. We have the right to disagree and think differently because we are still free to do so.