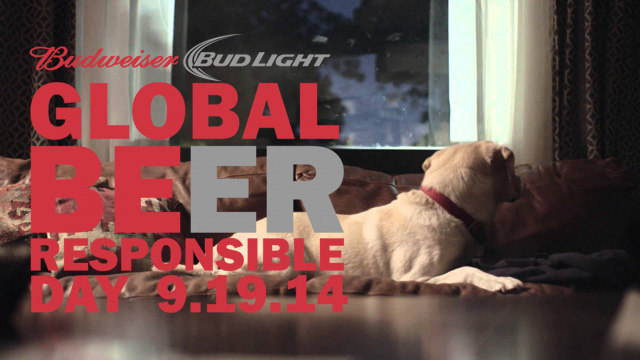 Budweiser released a new ad online today for Global Be(er) Responsible Day. The day is the work of  Anheuser-Busch InBev to promote responsible drinking. The company started the event in 2010.

The St. Louis Post-Dispatch has more on the making of the video and the fundraising efforts by employees this week for The BackStoppers. If you’re in downtown St. Louis already, or heading down tonight for the St. Louis Cardinals game, be on the lookout for the folks raising money around Ballpark Village and Busch Stadium. ABInBev will be making a $25,000 donation to The Backstoppers during a presentation tonight at the Cardinals game. AT&T and T-Mobile customers can also text BudDD to 80888 and donate $10.

The Backstoppers supports the families of those police officers, firefighters, paramedics and EMTs lost in the line of duty.

In Canada, Labatt employees are also out in support of Global Be(er) Responsible Day.

While drinking responsibly is a very serious issue that affects the lives of far too many, there is one slightly funny aspect of this campaign. ABInBev has decided to go for an official  Guinness World Record for “Most Pledges Received for a Campaign”. The company is “asking bartenders, waiters and store clerks around the world to participate in responsible serving training, with a goal of training 1 million servers globally by the end of 2014”. A noble goal for sure, the Guinness World Record angle seems a tad ridiculous. If you want to make your pledge, the company has set up a special website.

The 60-second “Friends Are Waiting” Budweiser commercial was produced by The Big Tree and Momentum Worldwide served as the creative consultants. Both are local firms.