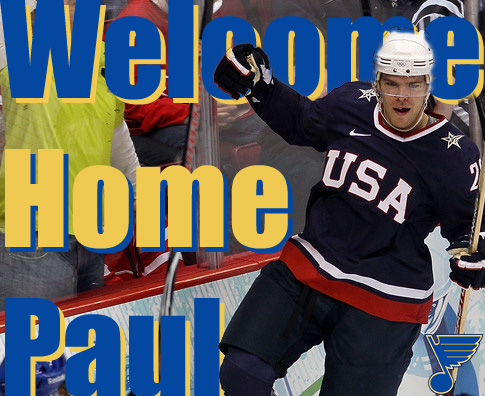 The St. Louis Blues made a splash today on the first day of NHL free agency, signing St. Louisan Paul Stastny to a 4-year deal. The deal is worth $28 million over the four years. It also includes a full “No-Trade” clause.

According to St. Louis hockey guru Andy Strickland, Kevin Shattenkirk of the Blues and Stastny are good friends, which helped in getting Stastny to sign on the dotted line. Strickland also reported that Stastny took less money and a shorter-term deal to come to St. Louis.

Stastny was born in 1985 in Quebec City, Quebec while his dad, Peter, was playing for the Quebec Nordiques. Peter, a member of the NHL Hall of Fame since 1998, played for the Nordiques until 1989 when he went to New Jersey for four seasons. He joined the St. Louis Blues in 1993 for 23 games over two seasons. The elder Stastny later worked in the Blues organization for a number of years, allowing Paul and his older brother Yan to grow up in St. Louis. Yan was a member of the Blues organization from 2007-2010, playing 50 games for the parent club over that stretch.

Paul Stastny was drafted 44th overall by the Colorado Avalanche in the 2005 NHL Entry Draft. The Avalanche were the Nordiques in Quebec prior to moving to Colorado for the 1995-1996 season. In his first season in Colorado, he had 28 goals to go along with 50 assists and finished second in the Calder Memorial Trophy voting. The award is given annually to the NHL Rookie of the Year. His father won the award in 1981. In eight seasons with Colorado, Paul recorded 160 goals and 298 assists. Playing in seven playoff games last season, Stastny recorded 5 goals and 5 assists while playing a average of 22 minutes each game.

The St. Louis Blues had an opportunity to draft Stastny in 2005 but instead took defenseman Scott Jackson. At this time, Jackson was considered the better prospect but in Stastny would prove to be the better NHLer and left the Blues disappointed in their selection at the time. Paul and his brother are dual citizens of the United States and Canada. With that, they had the option of playing for either country in international competition. Both brothers elected to play for the United States. Yan played in the 2005,2006 and 2o11 World Cup while Paul won a Silver Medal at the 2010 Winter Olympics and a Bronze Medal at the 2013 World Championships.

The friendship between Kevin Shattenkirk and Stastny goes back to when the two played together in Colorado. Stattenkirk came to the Blues as part of the trade that also brought Chris Stewart to St. Louis while shipping Erik Johnson, Jay McClement to Colorado. At the time, the elder Stastny was not happy with the trade.

No word yet on how Peter feels about this deal, but the St. Louis fan base is largely quite excited.

Welcome home @PaulyWalnuts26! You have no idea how excited Blues fans are!!! #BornToBeBlue #stlblues

The Colorado Avalanche fan base was predictably was not as happy about the move.

Losing @PaulyWalnuts26 is the worst break up I’ve gone through since middle school.

Of course who really cares about the Colorado Avalanche fans. Let’s Go Blues!

Also, kudos to this St. Louis Blues fan. Apparently whenever he asks Blues GM Doug Armstrong to do something, he does it.