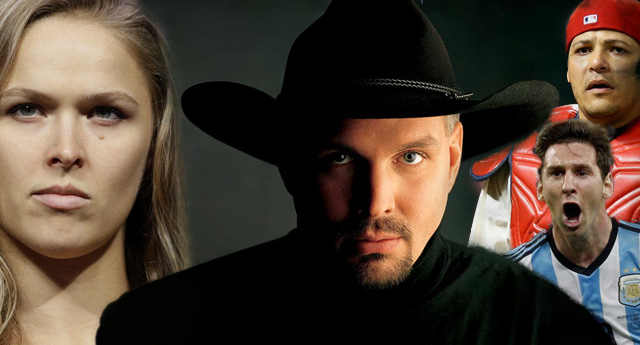 Raju had apparently been held captive for 50 years, often held in chains. He was rescued in India by Wildlife SOS. Money is currently being raised to care for Raju. The elephant reportedly cried when he realized he was being saved.

See photos from the rescue.

Netherlands, Argentina, Germany and host Brazil won their World Cup quarterfinal games over the weekend to advance to the semifinals. Brazil lost star striker Neymar when he suffered a broken vertebra in their quarterfinal game. They will also be without defender Thiago Silva, who picked up his second Yellow Card against Colombia. FiveThirtyEight Sports has an article explaining how their absences affect Brazil chances of winning the 2014 World Cup. Brazil is appealing Silva’s booking, but stands very little chance.

Argentina will be without Angel Di Maria, but they do have the last remaining real superstar in the World Cup in 27-year-old Lionel Messi.

Brazil plays Germany on Tuesday in their semifinal matchup. Argentina plays Netherlands on Wednesday in theirs. The losers of the semifinal games will play Saturday in the Third Place game and the final will be played on Sunday afternoon.

“Rowdy” Ronda Rousey again proved he dominance on Saturday night in Las Vegas at UFC 175. She disposed of Alexis Davis in just 16 seconds. A Rousey judo throw put Davis on the ground and a barrage of punches to Davis’s face caused the referee to stop the first. Dana White was upset with host Joe Rogan for asking Rousey after the fight if she would be willing to headline UFC 176, coming up in just three weeks. Rousey will not be available to fight then because she has minor knee surgery already scheduled and also needed nine stitches in her hand after the Davis fight. Rousey earned a $50,000 bonus for “Performance of the Night”.

While Rousey won’t be fighting again very soon, you can see her in The Expendables 3 in August. She will also be in Entourage and Fast & Furious 7 next year. She has also been tapped to star in Athena Project, a Warner Bros. movie adaption of the Brad Thor book.

52,000 unaccompanied minors have illegally crossed into the United States this year. Young mothers, many with children or pregnant, are also flooding the border towns. The minors and mothers are both handled in the same way by authorities,  they are released with an order to appear in court at a later date.

40 immigrants transferred to a San Diego detention center have scabies. At least two Border Patrol agents contracted the disease from them and may have spread it to their own families. Citizens have several towns in California have been protesting the dumping of illegals in their towns. Authorities are reportedly being sent in to deal with the protesters.

President Obama will be attending three Democratic fundraisers in Texas this week, but will not be visiting the border to see the problem firsthand.  Texas Governor Rick Perry said President Obama’s administration is either inept or doesn’t care about the issue at the border.

The rosters for Major League Baseball’s July 15th All-Star Game in Minneapolis were announced yesterday. Yadier Molina of the St. Louis Cardinals will start the game as the National League catcher. Adam Wainwright, Matt Carpenter and Pat Neshek will join Molina and manager Mike Matheny, the NL manager for the game. Wainwright was voted onto the team by his fellow players. Carpenter and Neshek were selected by Matheny. At 33, it’s Neshek first time being an All-Star selection.

The 2014 Al-Star Game Final Vote contest is being run to select to final player on each team. Voting ends at 3 pm CST on July 10.

The Verruckt water slide at Kansas City’s Schlitterbahn water park isn’t open to the public yet, but the ride’s designed and engineer recently filmed a trip of themselves going down the slide.

Abu Bakr al-Baghdadi, the Islamic extremist currently leading the ISIS in a violent surge through Iraq, recently visited the Mosul Museum.  Many historic artifacts were looted from Iraqi museums back in 2003 and either destroyed or sold on the Black Market. Officials are just now starting to get collections back and restoring the museums. It is feared the ISIS fighters will again take the priceless artifacts and sell them to finance their operations. al-Baghdadi was actually in a U.S. detention camp in Iraq for four years.

Transformers: Age of Extinction took the weekend box office with $36.4 million in its second weekend. Tammy, Melissa McCarthy’s project with her husband, opened to $21.2 million despite poor critical reviews. Deliver Us from Evil and 22 Jump Street each pulled in about $9.5 million and How to Train Your Dragon 2 rounded out the top five with $8.75 million.

Earth to Echo made $8.25 million in its opening weekend.

Chris Conley, a wide receiver at Georgia, and a few of his friends made a Star Wars fan film that is pretty great.

Men help bear get head out of milk can

These good men came across a black bear with his head stuck in a milk can in a field. What they did next will give you a chuckle and may make you go “AWWW…….”.

Super Typhoon Neoguri is thought to currently feature sustained winds of 155 miles per hour, which is a lot like a Category Four hurricane. It could get even stronger before it makes landfall in Japan. Waves of 45-50 feet could hit the Miyako Islands.

Garth Brooks will live-stream a press conference on his website at 11 am CST Thursday. It’s been 13 years since Garth toured, He told Good Morning America that he would go on tour in 2014 in December of last year, but no dates have been announced. People are speculating that Brooks will either announce dates for a tour or plans for a new album. Plans were in place for Garth to play five concerts in Dublin, Ireland’s Croke Park, but the city council there only gave promoters permits for three of the five shows. Brooks has said that he either wants to play all five planned shows or none at all. People who calculate these sorts of things say the city could lose $11.8 million to its economy if the shows are canceled.

There had been a teaser on GarthBrooks.com touting a major announcement today, but the controversy in Ireland cause that to be pushed to Thursday, according to Rolling Stone.