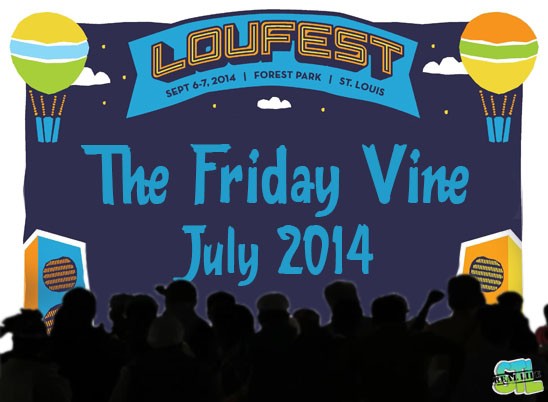 Your Real Life chance to win something fun in St. Louis every month is here with #TheFridayVine contest. Find out how to win below…

Theme for July 2014 – LouFest The Friday Vine June prize is…2 One-Day passes to the LouFest Music Festival in Forest Park. What day the passes are for will be announced at a later date. Some of the bands scheduled to play at the two day festival are Arctic Monkeys, Matt & Kim, Old Salt Union, Pretty Little Empire and Outkast.

We’ll give you some clues and you enter the name of the 2014 LouFest musical act you think we are talking about. It’s that simple. We’ll pick the winner on July 25th.

Here’s how to win… 1. Select Fridays of each month we will post #thefridayvine video on our homepage. (You can also follow us on Facebook or Twitter to get the clues). 2. To enter, you will need to watch the Vine video and put together the clues. 3. Enter to Win by completing the form below (only visible during contest times). 4. For each answer you get correct, you will be given an entry into the contest. 5. The winner will be randomly selected from all entries and announced on the 4th Friday of each month. You can only enter once per Vine video. However, you can get an extra entry by sharing a tweet, presented to you after you complete the entry form. Don’t forget to like us on Facebook to find out about next month’s #TheFridayVine giveaway, plus other great STL events and giveaways happening each month. Good Luck! Get it in your inbox here. Follow us on Facebook to stay connected.

Previous Contests:   Brought to you by Mills Apartments