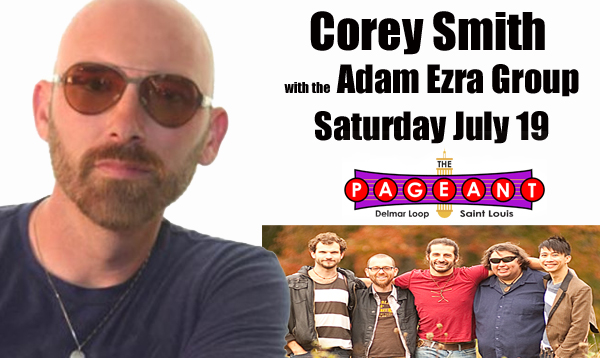 Corey Smith returns to St. Louis this Saturday, July 19, with a show at The Pageant. Tickets to the show are $17.50 in advance and $20 at the door. Boston-based acoustic rock band the Adam Ezra Group will open for Smith.

Corey Smith was a high school teacher in Georgia who happened to play his brand of “country, folk-rock” on the side before setting one profession to side and making music full-time. In 2012, he grossed a reported $4 million with virtually no radio air play. His high-energy shows featuring his songs about living life have gained him legions of fans across the country. Many of those fans proudly know every word of many of Smith’s songs and sing along at the top of their lungs. He’s sold 250,000 albums in his career and almost two million digital singles. Smith has released seven full-length albums comprised almost entirely of songs he wrote himself. He’s currently working on his next album, which is being produced by Keith Stegall. Stegall has worked with such country music legends as Alan Jackson and the Zac Brown Band.

Smith does a weekly webisode series for his fans where he talks about his music, his family and plays songs he’s working on. Smith tours relentlessly and recently got off a tour with Darius Rucker. Smith comes to St. Louis fairly regularly and always talks during his St. Louis shows about how much he loves playing The Pageant. Here he is playing one of his hits, “If I Could Do It Again” at The Pageant in the summer of 2008.

The band also has this Boston-themed catchy tune.

Tickets to see Corey Smith this Saturday with the Adam Ezra Group may be purchased from The Pageant website in advance for $17.50 or are available on the day of the show from the box office for $20. Doors will open at 7 pm with the show starting at 8 pm. We’ve made a video playlist of songs you’ll hear this Saturday night at The Pageant. Enjoy and be sure to check out Huzzaz.