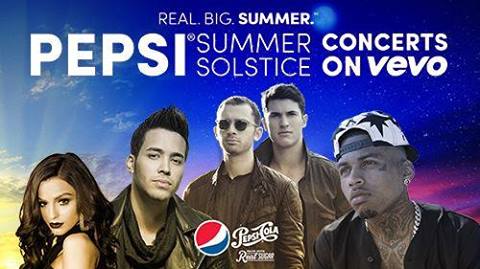 Pepsi is putting on the Pepsi Summer Solstice concert series today, the longest day of the year. Four musical acts will perform throughout the day is from four different cities across the country. Timeflies started the series at 4 AM CST with a concert in Montauk, New York. Kid Ink will perform in St. Louis today at 1 PM. Cher Loyd will perform from Jackson, Wyoming at 5 PM and Prince Royce will close out the series from Malibu, California at 10 PM CST.

As of Wednesday,the city in which Kid Ink would perform was being kept secret, at least according to this Billboard piece.

The Pepsi Summer Solstice concert series is a partnership between Pepsi and VEVO. All of the concerts will be broadcast live across the world from the VEVO site. Each concert will then be replayed until the next concert starts.

Kid Ink is a rapper signed to RCA Records. RCA had a Digital Product Manager in the air at 5:30 AM this morning flying in for the show.

Wheels up. STL here I come for @Kid_Ink‘s #PepsiSummerSolstice concert on @Vevo. It all goes down at 2pm ET today!!! #batgang #mainchick

According to a promotional model hired for the show, it will be happening in front of the Graffiti Wall just south of downtown in the Kosciusko neighborhood. Kid Ink tweeted about this St. Louis show  a few hours ago.

**UPDATE** Kid Ink also tweeted out the location of the show

STL! At 1pm, I will be doing a FREE Show at Paint Louis! (Choteau & Warf) You got an hour…see ya there! #PepsiSummerSolstice