The U.S. Supreme Court issued a 5-4 decision today that says certain companies do not have to abide by the contraception mandate in the new health care plan passed in 2010, dubbed ObamaCare. In the opinion, the court said their ruling only applies to “corporations that are under the control of just a few people in which there is no essential difference between the business and its owners”. Hobby Lobby, which brought the challenge, is one of those companies. Here’s the full decision.

In another major decision, the court ruled that non-members can’t be required to pay into a public sector union. Also a 5-4 ruling, that case concern Illinois home health care workers who were being forced to pay into a union. The ruling only applies to home healthcare workers and doesn’t go into regulating things like teacher’s union or private sector workers. Here’s the full decision with lots of legal talk.

The Group Stage of the 2014 World Cup ended on Thursday in Brazil and the Knockout Stage began Saturday. Brazil barely escaped from Chile in the opening game. The teams were tied after 90 minutes and then scoreless in the thirty minutes of overtime. David Luiz, Marcelo and Neymar scored for Brazil in penalty kicks to push the host nation through by a 3-2 score. If Brazil had lost, things would not be pretty there. Colombia beat a Luis Suarez-less Uruguay side 2-0 in the second Saturday game. Brazil and Colombia square off on July 4th in the Quarterfinals.

Sunday’s games upped the ante in terms of excitement. Mexico led Netherlands 1-0 for most of the second half of their game. An 88th minute strike from Wesley Sneijder tied the game. Then, four minutes into stoppage time Arjen Robben was fouled in the box. Klass Jan Huntelaar  nailed the penalty to give Netherlands a 2-1 win. Robben is known to take dives and apologized for one he took in the first half of the game. He maintained that the penalty call at the end was legitimate.

In the afternoon game, Costa Rica led Greece 1-0 through 90 minutes. Sokratis Papastathopoulos buried a rebound to tie the game 12 seconds into stoppage time. The teams were still deadlocked at 1 after thirty minutes of overtime and went to penalty kicks. Costa Rica score on all five of their attempts and moved on 5-3.

Group E winner France beat Group F runner-up Nigeria 2-0 in the early game today.  Group G winner Germany takes on Group H runner-up Algeria in the second game. Here’s how to stream that one if you can’t get out of work early. In an interesting side note to that game, today is Ramadan for Muslims. Participating Muslims fast from dawn to dusk during Ramadan. Algeria’s coach, Vahid Halilhodzic, has said that he is leaving that decision up to each player on his team. 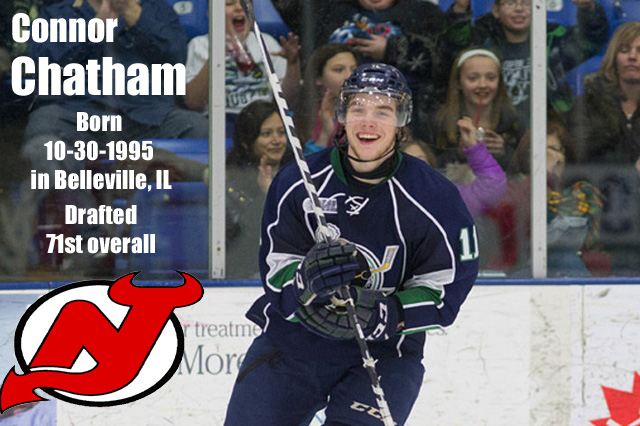 Connor Chatham became the first Metro East native to be drafted into the National Hockey League on Saturday. Chatham attended Althoff and Belleville East high schools before moving away at 15 to focus on his hockey career. He was drafted in the third round, 71st overall, by the New Jersey Devils.

From the “What The Hell Did You Think Would Happen” department comes this story. Facebook changed the news feeds of 600,000 users back in January 2012 to either be overly positive or overly negative. Here’s the deep mumbo-jumbo the Facebook scientists said about their results

“When positive expressions were reduced, people produced fewer positive posts and more negative posts; when negative expressions were reduced, the opposite pattern occurred. These results indicate that emotions expressed by others on Facebook influence our own emotions, constituting experimental evidence for massive-scale contagion via social networks.”

People really shouldn’t be surprised that this happened and they definitely shouldn’t be upset. It’s actually a pretty cool experiment. Facebook isn’t a public utility. When you play in the Facbook pool, you play be their rules. Some woman who obviously likes to hear herself talk tweeted this.

The 68-year old rocked a huge crowd at Glastonbury on its final day. Ed Sheeran, Ellie Goulding and Yoko One also appeared on stage. An estimated 150,000 people were in attendance. Dolly said playing this festival had been a life-long dream of hers.

The pair performed Bon Jovi’s “Lay Your Hands On Me”

The House Minority Leader Nacy Pelosi reportedly said that following over the weekend.

“This crisis that some call a crisis, we have to view as an opportunity. If you believe as we do that every child, every person has a spark of divinity in them, and is therefore worthy of respect — what we saw in those [holding] rooms was a dazzling, sparkling array of God’s children, worthy of respect.”

She apparently is completely off her rocker. 60,000-90,000 unaccompanied minors are expected to enter the country this year. President Obama is expected to ask Congress for $2 billion or more to handle the immigration surge. I assume he legitimately thinks there’s some magical money tree we can go get some money off of. Some Congressional leaders are pushing the Obama administration to create a refuge program for children from Central America.

The fourth Transformers film, Transformers : Age of Extinction, topped $100 million at the domestic box office and pulled in over $200 million at the foreign box offices. The studio’s plan to focus on China paid off as it hit $90 million in revenue there. 22 Jump Street finished second at the weekend box office with $15.4 million and How To Train Your Dragon 2 finished third with $13 million. Think Like A Man Too finished fourth and was the only other film over the weekend to top $10 million. Maleficent rounded out the top five with $8.2 million.

When I first heard this story I thought a women’s basketball recruit punched a senior on her future team. Turns of the recruit doing the punching was a recruit for the football team. Nigel Bethel III was one of the Red Raiders’ more highly-regarded recruits. During a game at the student recreation center, he reportedly punched Amber Battle in the face and broke her nose. Bethel III apparently tweeted “trouble always seems to find me” after the incident and then quickly deleted it. Hopefully Battle fully recovers and Bethel III comes to the realization that he is a complete dumbass and has issues.

The Los Angeles Dodgers were really bored yesterday because they were beating the St. Louis Cardinals by a hefty margin. They decided to play a prank on teammate Scott Van Slyke.

Put your pants on without using your hands

This Weekend in St. Louis Ryan 881 days ago.

This Weekend in St. Louis Ryan 881 days ago.