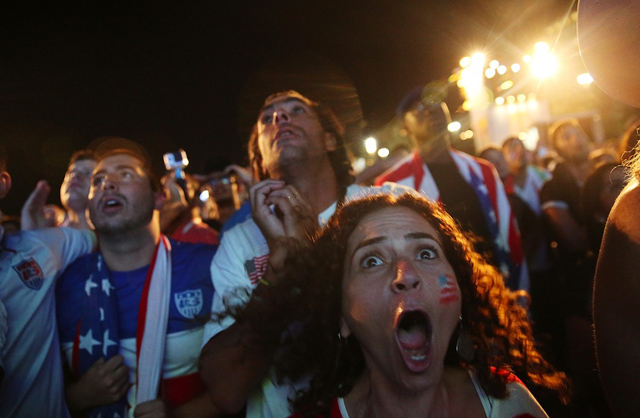 USA had it won. A guaranteed spot in the knockout round was soo close. A mistake early in the backfield had put Portugal up 1-0 but a beautiful shot by Jermaine Jones in the 64th minute evened things up. Graham Zusi crossed a ball off Clint Dempsey’s stomach in the 81st minute to send proud Americans across the world into a frenzy. At the 90-minute mark, the United States was still up 2-1. A late U.S. substitution is rumored to have been why the referee elected to add 5 minutes of stoppage time instead of 4. Portugal used that to their advantage when Cristiano Ronaldo crossed a ball into the box that Silvestre Varela headed past Tim Howard to tie the game. Without that goal, Portugal would have been mathematically eliminated from the World Cup and the United States would have advanced. Now, all of the teams in Group G are still alive and no team has qualified to advance just yet. Group E is the only other group where that is the case. Clint Dempsey and company still control their destiny heading into Thursday’s 11 am tilt against Germany.

The top two teams in each group advance. If the Americans beat Germany, they will win the group and likely play Algeria out of Group H. If the U.S. finishes second in the group, they will get the “honor” of playing Belgium.

The USA-Portugal match earned a 9.1 overnight rating. Did you wonder what the heck was going on with Cristiano Ronaldo’s hair?

Cheer up, soccer fans and start practicing your “I Believe That We Will Win” for Thursday.

The United States has been cooling since the 1930s

Blogger Steven Goddard recently posted on his blog about how historical temperature data published by National Oceanic and Atmospheric Administration (NOAA) appears to have been manipulated to show that temperatures are warming when largely they are not. Christopher Booker of The Telegraph explains things a little more.

President Obama recently talked about “hurricane intensity” increasing due to global warming when there hasn’t been a hurricane that’s made landfall in the US in eight years.

Immigrants are pouring across the border

If you haven’t been paying attention, there has been a huge surge recently in immigrants crossing the Mexican border into the United States. One report says that many are jumping on freight trains to get to the border because they’ve heard how easy it is to cross the border and stay. Another report elaborates that people are actually jumping on moving “death Trains”, which is really dangerous. Central American media outlets are said to be encouraging minors to make the trek across the border. They estimate there are 1,000 Central American minors currently being housed at the Lackland Air Force base. A major health crisis could easily come as a result of this influx. 378 unaccompanied toddlers under the age of two have been taken into custody at the border since October.

Drug cartels are using the rise in border crossings to easily smuggle drugs into the country.

Every reality singing competition wants you to believe they are different. The Voice wants you to think that looks don’t matter. American Idol wants you to think they are the best. We still aren’t sure what X-Factor wanted us to think. Rising Star is definitely different, for better or worse. It has the requisite celebrity judges in Josh Groban, Brad Paisley, Kesha and Ludacris. The requisite recording contract prize, this one from Capitol Records. While the judges’ votes do count for something, viewers can also vote via the official app. Here’s a breakdown of the first episode.

Or you could watch the first episode right here

Cardinals pitchers Michael Wacha and Jaime Garcia have both been placed on the 15-day disabled list with shoulder issues. Garcia has frequently had shoulder issues throughout his career and now is experiencing discomfort in the left shoulder that he had operated on last May. Wacha has a stress fracture on the back side of his shoulder. Joe Kelly is close to returning to the rotation and Carlos Martinez is likely to get a few starts. Joe Strauss of the St. Louis Post-Dispatch was on The Morning After this morning talking about some roster moves the St. Louis Cardinals may be interested in.

Gluten-free may not be healthy living

An article in the Wall Street Journal questions whether a gluten-free diet is healthy for the majority of the people following one.

Hope Solo arrested over the weekend

United States Women’s National Team and Seattle Reign goalkeeper Hope Solo was arrested over the weekend on allegations of domestic assault. Apparently Hope’s sister had a party at her house where Solo became quite angry and intoxicated. She is accused of leaving visible injuries on her sister and 17-year old nephew. Who knows what is going on with Hope Solo. This is a lady who married Jerramy Stevens hours he was arrested for assaulting her and two months after they started dating. Solo is due in court today. Her lawyer maintains that she was actually the victim in the disturbance.

Think Like a Man Too wins the weekend box office

Think Like a Man Too fell short of the original’s $33.6 million opening.

This happened in Milan recently during the band’s performance of “Daughter”.