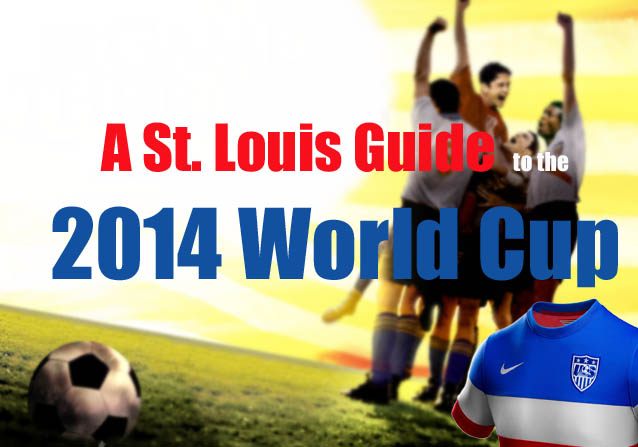 The 2014 World Cup begins this weekend in Brazil. The country is basically as ready as it is going to be for the Cup to begin. Here’s what you need to know to follow the World Cup from the comfy confines of St. Louis

$11 billion+ has already been spent by the Brazilian government of World Cup stadiums and whatnot. John Oliver had an amazingly-awesome look at FIFA, the governing body that puts on the World Cup.

The St. Louis connection to this World Cup is strong. Brad Davis, who starred locally at Chaminade and then Saint Louis University, is a defender on the US Men’s National Team. Vedad Ibisevic stars for Bosnia-Herzegovina. He played his high school soccer at Roosevelt High and then played one year at SLU. Taylor Twellman, a product of Saint Louis University High, has an important role on the broadcast team for ESPN.

Who Should I Root For?

Obviously you should root for the Americans to win the whole thing. If you don’t, you probably hate bald eagles, hot dogs and freedom. If you filled out a World Cup bracket and didn’t have the Yanks winning on July 13, then you are a realist. Even the US head Coach Jurgen Klinsmann told the New York Times that the US can’t win this World Cup. In one of the most controversial American soccer decisions ever, Klinnsmann elected not to take Landon Donovan to Brazil. The coach decided instead to take younger players like Chris Wondolowski and 18-year-old Julian Green. Donovan has since signed on with ESPN to be an analyst during the tournament for them.

The USMNT faces an uphill battle to get out of the Group Stage. Group G has been called the “Group of Death” with the United States, Germany, Portugal and Ghana. One oddsmaker gives the US a 38.5% chance of getting out of Group G. Ghana has beat the Americans in the last two World Cups. Portugal and star Cristiano Ronaldo have an outside chance at winning the whole thing. The Germans are ranked #2 in the world and are at 7-1 odds to come out on top July 13. The injury recently to star midfielder Marco Reus was just the latest to hit the team, however.

St. Louis has the largest collections of Bosnians outside of Bosnia, which is a result of refugees flocking here in the mid-1990s during the war in their home country. In October of last year the Bosnia and Herzegovina national team beat Lithuania 1-0 to qualify for their first World Cup. Tens of thousands of Bosnians flooded the streets of Sarajevo to celebrate the historic moment. You’re probably wondering what the big deal is. So they qualified? When Paul Caligiuri scored to qualify the US for the 1990 World Cup, it was their first in 40 years.

The Dragons are currently ranked 21st in the world and are led by Edin Dzeko. Dzeko plays his club ball for Manchester City of the English Premier League. He scored 26 goals last season and was a key part of City’s squad. For the National team, Dzeko scored 10 of BiH’s 30 goals during qualifying. Bosnia’s other top striker is Vedad Ibisevic, who you read about earlier in this post. Bosnia’s Group F also consists of Nigeria, Iran and Argentina. Bosnia fell 2-0 to a Messi-less Argentina here in St. Louis back in November. Odds are Bosnia and Argentina will advance out of this group. Fox Soccer has detailed previews for each of the 32 qualified nations.

Many sites are saying this Cup is Brazil’s to lose. Brazil has hoisted the Cup 5 times, more than any other country. According to FiveThirtyEight, Argentina, Germany and Spain stand the next best chance to win the whole thing. While the site gives Brazil a 45.2% chance to win, it gives the United States a .04% chance. Bosnia-Herzegovina has a slightly better chance at .09 %

Game times for the 2010 World Cup in South Africa weren’t ideal, games started as early as 6 am CST, but they weren’t terrible. Things are even better for this World Cup. No game starts earlier than 11 am (Central) or later than 8 pm.  The majority of the games will start here in St. Louis between 11 am and 5 pm. The Group Stage United States games

Where in St. Louis to watch the games

The Riverfront Times put out a list of the seven best places in St. Louis to catch the games. Amsterdam Tavern, Meshuggah Cafe, Barrister’s, International Tap House, Llywelyn’s Pub, Scottish Arms and Tigin Irish Pub made their list. Amsterdam also made this Buzzfeed list as Missouri’s best place to watch the games. International Tap House is debuting 2 beers this Thursday made exclusively for iTap by local breweries. 2nd Shift created “i Ballz” and 4 Hands created “WC ’14 Ale” in collaboration with homebrewer Patrick Strohmayer. Ballpark Village in downtown St. Louis and the St. Louis Ambush will be hosting watch parties for each US game.

Deadspin published this ridiculously-awesome list of how to stream all of the World Cup games.

Watch Miracle Match this week. It’s the film that was shot in St. Louis under the title The Game of Their Lives about the 1950 United States World Cup team that beat England 1-0. Five St. Louisans anchored that team and Dent McSkimming of the St. Louis Post-Dispatch was the only American journalist in Brazil for the game.