Word on the streets is a devilish plan has been hatched to kidnap the three St. Louis professional sports mascots today. Fredbird, Louie and Rampage have been targeted by unknown criminals. Here at RealLifeSTL we speculate they are from Chicago. All hope lies in a brave St. Louis girl named Jalisha.

14-year-old Jalisha will go through police academy training today and become an honorary St. Louis County Police Officer. Word is her first assignment will be to track the dastardly criminals who are targeting the lovable St. Louis mascots.

A well-placed informant has told us to be at Ballpark Village before 3:15 pm today if we want to witness Jalisha take a stand for all St. Louisans as she seeks to foil this evil plot. Reports have not been confirmed that she has consulted with Batkid crime-fighting techniques.

If you couldn’t tell already, this is all part of a plan by the Make-A-Wish chapter here in Missouri to grant the wish of 14-year-old Jalisha. She has been battling End Stage Renal Disease.

Make-A-Wish is asking for the public’s help in fulfilling this wish. Interested parties should gather outside Ballpark Village at 8th and Clark beginning at 2:15 pm. PO Jalisha is expected to arrive around 3:15 pm.

Parking is available at Ballpark Village and surrounding lots. A shuttle will also be running from Trueman’s Place Soulard (1818 Sydney Street) from 1:30 pm – 5 pm. 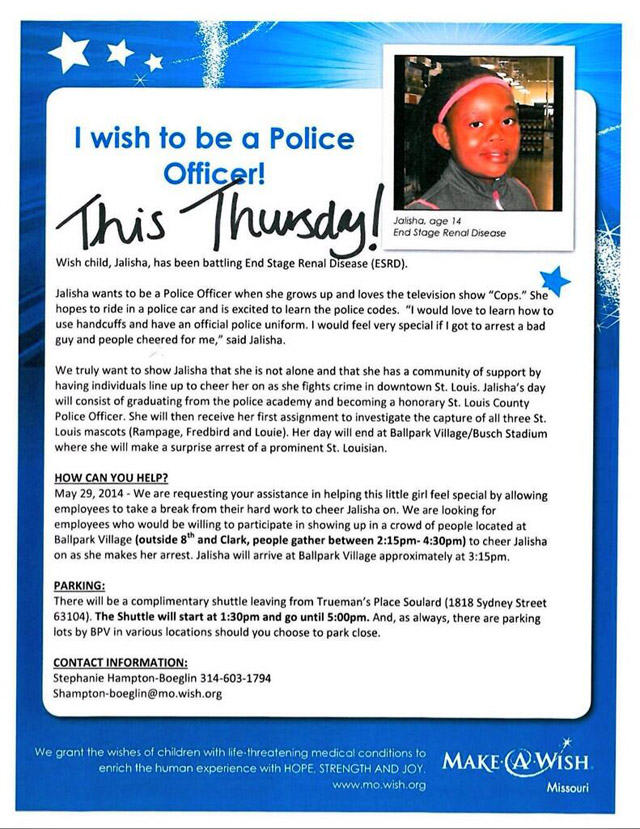