It’s a warm, late spring evening and you’re looking for a cool place to hang out with friends, grab some delicious food and a few drinks. Naturally, you think “We should head to Ferguson,” right? If not, you should!

Ferguson has had its ride through the positives and negatives of life in North County, but recent efforts to rebuild have created some trendy hot spots to spend an evening. When it was first suggested to me that we head to Ferguson, I was notably skeptical, expecting to find myself in a dive bar with just the local townies. What I stumbled upon was anything but. We started our evening at the Ferguson Brewing Company. With a cool little brick patio and a giant concrete version of Phil the gorilla to meet us at the door, my skepticism began to subside. Walking through the door, the décor is casual but warm and inviting—sporting a glass wall overlooking the brewery and chalkboard walls filled with the house brews currently on tap. 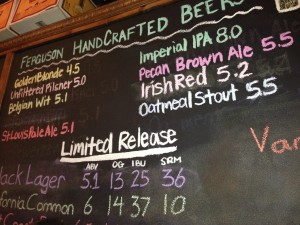 Immediately, you are met with the strong aroma of barbeque as they smoke everything from brisket and pork to chicken wings. The menu is definitely a step above your standard pub food with house made favorites like smoked bratwurst sliders, turkey and salsiccia meatloaf, and crisp flatbread pizzas. On the lighter side of things, there is a soup and salad menu complete with a Cajun shrimp and spinach salad and beer cheese soup, crafted from one of the house brews. Of course you can still find the usual pub fare of hand held favorites like sandwiches, burgers, and chicken strips complimented with house-made chips.

The real joy comes from their beer selection though. With 9 regular favorites including gems such as the Pecan Brown Ale and Oatmeal Stout, as well as a handful of seasonal limited release selections like their Habanero Brew, you’re guaranteed to find something that will suit your palate. I was fortunate enough to attend with a large crew, allowing me the opportunity to sample much of what they have to offer, both in terms of food and beverage, and can say that nothing disappoints! This is probably why they’ve received a number of accolades including “Best Wings,” “Best Happy Hour in North County” and one of the “45 Best Places to Savor a Drink,” just to name a few.

The Ferguson Brewing Co. is open 7 days a week for lunch and dinner options with later hours on the weekends. The locale is family friendly, even sporting a kids menu for the little ones. So, if you find yourself craving a delicious meal and a craft brew in a trendy place to hang out, don’t overlook Ferguson as I promise you won’t be disappointed.