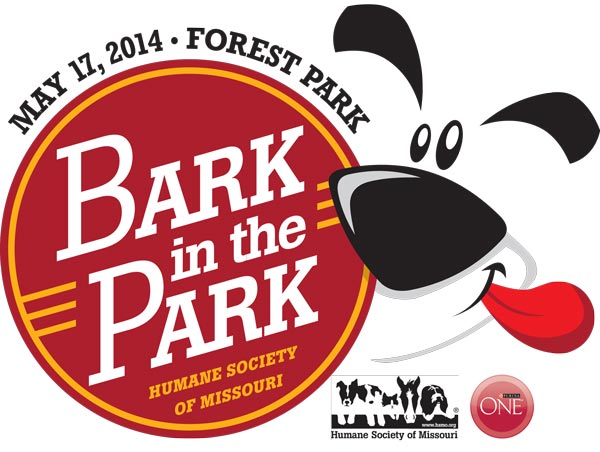 The 2014 Bark in the Park dog extravaganza will take place Saturday, May 17 at Cricket Field in Forest Park. The event is presented by Purina and raises money to help homeless animals through the Humane Society of Missouri. The extravaganza features a 5K Run, 1-Mile Walk and Pet Festival. Registration is $35, which includes entry into the run or walk, the festival and an official event t-shirt. The event goes from 8 am – 1 pm.

Back again after its debut last year is the popular Pancake Breakfast. The all-you-can-eat event goes from 9-11 am and features pancakes, bacon, veggie sausage and juice. Cost is $8 per registered adult and $5 per child 12 and under.

Also back will be the various pet contests and a performance by the Purina Incredible Dog Team. Heartgard and Frontline are also sponsoring the Interactive Family Fun Center. Barn Buddy farm animals will be in attendance for the enjoyment of all as will various food trucks. Pet adoption opportunities and pet micro-chipping are also on the bill.

This is the 21st annual Bark in the Park event. It’s the largest fundraiser of the year for the Humane Society of Missouri and has grown to become the largest dog festival in the Midwest. HSMO has been serving animals in need since 1870 and currently has three adoption centers around the St. Louis area. It also maintains Longmeadow Rescue Ranch in Union, Missouri which serves horses and other farm animals. HSMO also maintains the Carol Gates Throop Memorial Park on the site of its former headquarters at 1210 Macklind Avenue.

You can register as an individual or as part of a team for Bark in the Park. Fundraising is another big component of Bark in the Park. Proceeds from the event benefit the Humane Society’s Animal Cruelty Fund. Various prizes are offered for hitting milestones in your fundraising at individual and team levels.

The Bark in the Park website has a running total of money already raised. It also has individual and team fundraising leaders. The top team this far has raised over $7,000. Two individuals are in a heated race for that top spot with both having raised $2,035 as of this writing. Overall, the event currently sits just shy of $44,000 towards its $100,000 goal.

Purina is also donating $1 to the cause for each pet/owner “selfie” posted to Twitter or Instagram with the hashtag #SelfWe. There will also be a giant “selfie” taken of all the participating dogs and owners plus a photo booth.

Here’s the promotional video for the 2014 Bark in the Park. Be sure to check out the FAQ section on the website. There are a few guidelines HSMO asks that pet owners and dogs follow to ensure a safe and fun day for all.