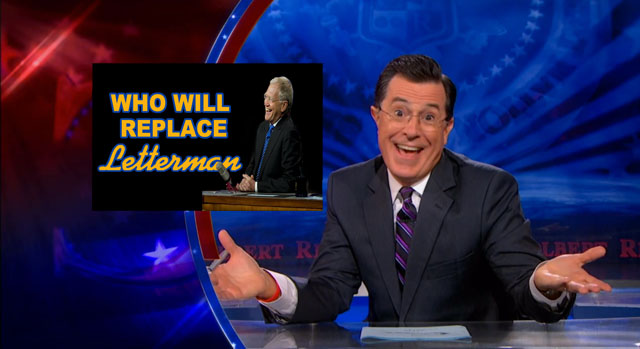 CBS announced earlier today that Stephen Colbert will take over for David Letterman on the Late Show. Letterman just announced last week that he will be retiring sometime in 2015. Colbert’s start date is up in the air right now, as is the remaining cast of the show and the location of the show. Those will be decided at a later date, according to CBS. Colbert has hosted The Colbert Report on Comedy Central since 2005. He was previously on the channel’s The Daily Show from 1997-2005.

On Comedy Central, Colbert “impersonates a right-wing blowhard”. He won’t be bringing that same character to Late Show, according to Forbes. Letterman made a reported $42 million in 2013 for hosting. Colbert by comparison brought in under $10 million. Financials of the five-year deal that Colbert signed to host haven’t been announced.

twitter’s just a way for me to follow the ins and outs of stephen colbert’s career — Mindy Kaling (@mindykaling) April 10, 2014

Mashable has a roundup of tweets on the subject.

CBS Chairman Nina Tassler told Entertainment Weekly that Colbert was head and shoulders above the other candidates.

You can get a better idea of who Colbert really is by reading this Rolling Stone cover story from 2009.

Colbert was just recently embroiled in controversy after someone handling The Colbert Report twitter feed for Comedy Central tweeted part of a joke he had made on the previous night’s show. The segment was supposed to be poking fun at Washington Redskins owner Daniel Snyder about his ridiculous response to the controversy surrounding the Redskins name. Taken out of context, the tweet seems to poke fun at the Asian community and caused an uproar, with Twitter users using the hashtag #CancelColbert.

With Jimmy Fallon’s success on The Tonight Show, we could be in for more of Stephen Colbert’s dance moves.