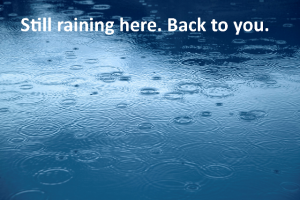 Weather in St. Louis can be brutal and completely unpredictable. I fully appreciate the efforts of the meteorology professionals on all the news stations working tirelessly to make sure we are safe when severe weather strikes. They certainly make sacrifices for the sake of our safety.

What I don’t understand is ridiculously extensive  weather coverage when there are no remaining threats for the viewing area. Specifically, KSDK – News Channel 5 in St. Louis. Every other news station in St. Louis moved the warnings to the bottom of the screen and continued with regularly scheduled programs but not Channel 5. Not in the morning when they provided coverage instead of airing the Today Show and not at night when they provided coverage instead of Community, Parks & Rec, and Parenthood. I don’t really care about the regular programs because I, and most of America, have the internet and can catch up later. I do care because I respect the KSDK team and I think they need a reality check.

Starting with the morning newscast. We were given multiple views, angles, and opinions about uprooted trees and damage at a golf course. Unless that tree was on your house or you planned to golf that day, this coverage was unnecessary. There were no injured parties and damage was minimal. But we were given coverage minute by minute so we could see the trees.

The evening news was a little better given there were actual tornado warnings, but by 9:00 it had gone too far. Around 8:50 they said there were no threats in the viewing area anymore. So, woohoo, back to programming right? Nope. We were able to watch the entire weather team show us pictures of rain coming down and flags flying in the air for an additional hour. I also know exactly how big the hail was in every corner of the St. Louis area.

Again, coverage is appreciated. But, in the future, please stop when it is no longer necessary. We don’t need a reporter on every corner showing us the rain that we can very clearly see for ourselves (or the snowfall in the winter for that matter). You are wasting the time of the reporter and your viewers.

For your enjoyment… check out the comments on the Facebook post about airing Parenthood at a later date. Here are a few of my favorites. 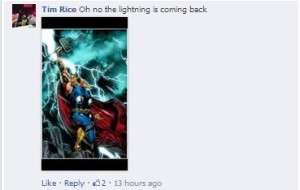 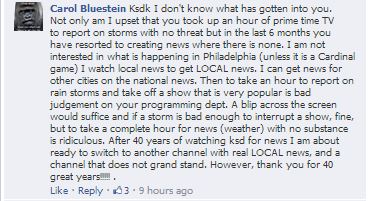