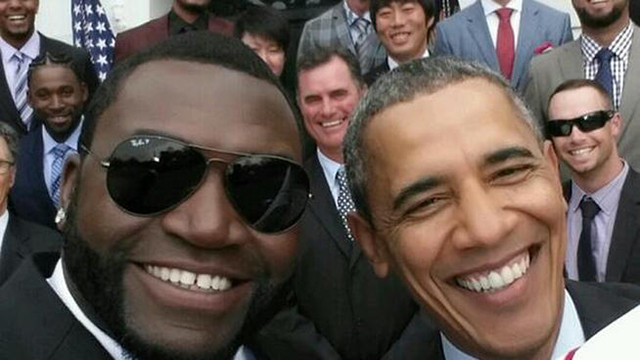 No More Selfies at the White House?

You may have seen this selfie that David Ortiz took with President Obama last week at the White House. It came while the Boston Red Sox were there being honored by the President for winning the 2013 Word Series. All looks fine and good with Ortiz just having a little fun, but it turns out that Ortiz actually was doing it as part of his contract with Samsung to promote the company’s products. That raises questions about whether the President’s likeness should be used to promote a product of company without his consent.

The legendary actor died yesterday at 93 years of age. Rooney’s first movie role came in 1926 and he had just recently filmed scenes for Night at the Museum 3. The Hollywood Reporter has video of one of the final interviews he ever gave.

Yesterday was our senior prom. We lined up for our pictures on a bridge & it collapsed and we all fell in the creek.. pic.twitter.com/p9OuMnHYkX

Seriously, if you take a mascot’s head off you deserve whatever you get, which is hopefully a punch of the face.

Wrestlemania 30 on the WWE Network

Wrestlemania 30 was last night on pay-per-view and the revolutionary WWE Network. The Network performed pretty flawlessly in one of its first big tests. The WWE announced the network already has 667,287 subscribers, which makes it the “fastest growing digital subscription service”. Highlights of the show included The Undertaker suffering his first-ever Wrestlemania defeat, Daniel Bryan becoming the World Heavyweight Champion and an opening sequence with The Rock, Stone Cold Steve Austin and Hulk Hogan all in the ring at once.

Lambert owes a little of her success last night to Nicolle Galyon, a former contestant on The Voice. Galyon co-wrote Lambert’s “Automatic”, which she performed on the show as well as “We Were Us”, which Miranda and Kieth Urban won Vocal Event of the Year for.

As if you thought this whole Gwyneth and Chris “consciously uncoupling” thing couldn’t get stranger. The pair took a “break-up moon” to the Bahamas together where they also took part in some weird ceremony to “prepare for their separation”

The sequel easily topped the box office and became the biggest April opening weekend ever when it topped Fast Five‘s $86.2 million. Noah came in second with $17 million and Divergent came in third with $13 million. God’s Not Dead continued its strong run with another $7.7 million. The Christian film was reportedly shot for just $2 million and has brought in $32.5 million to date. We’ll have more about the numbers on Thursday in our Weekend Movie Review.

Lots of people had problems streaming the premiere online when they should have been able to. The ridiculous amount of demand wasn’t exactly a surprise. Surely customers that couldn’t watch the show who have rather seen HBO fix the problem than come up with cutesy tweets about it.

Kentucky and Connecticut to Play for National Championship.

The game tips off at 8:10 pm CST tonight. ESPN thinks Kentucky will win in part because they are so athletic. Then again, UConn just might win because they are a big underdog and sports are sports.

The game played on the side of the Cira Centre, a 29-story building, was part of Philly Tech Week. Drexel University students were behind the event.